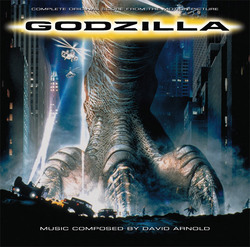 While the originality of its thematic material may be questioned, there is no denying the sheer energy and massive size of David Arnold\'s Godzilla. Both Stargate and Independence Day received releases of their score on album but Arnold\'s third and (as of this writing) last collaboration with the creative duo of Dean Devlin and Roland Emmerich was all ready for a CD pressing when the release simply did not happen. Given the disdain critics and public alike reserved for the American remake of the Japanese classic, it is no stretch to see the lack of commercial interest in the score release of a dud to have acted as the proverbial wrench in the works. Arnold\'s music, however, is no dud and it is a great joy to see La-La Land Records step up and finally release Arnold\'s third action spectacular with nothing less than a complete recording on two CDs. While Godzilla\'s influence can clearly be traced back to Arnold\'s previous Independence Day, the composer\'s towering and roaring arrangements for string, brass, woodwinds, and extensive percussion array leave their mark on the listener. This is a behemoth which fears no excess, delivering broad dynamics, thrilling action music, and grandiose hits of pure wonderment.

The introduction to the score shows Arnold going to apocalyptic heights to depict the nuclear origin of Japan\'s most revered monster. Godzilla\'s terrorizing theme, a clear lift from Herrmann\'s Cape Fear, creeps up on the listener in "The Beginning", its notes descending with monstrous weight, before Arnold puts it aside momentarily to introduce his Origin Theme, a slow militaristic march expanding its dramatic wings through the use of broad harmonies for strings and brass, all the while kept in formation by the slow snare rolls. A theatrical pause allows Arnold to unleash upon us the fully-formed Godzilla Theme, blasting its way through the speakers, violins and trumpets madly reaching deafening heights while the thundering bass drum grounds the fearful majesty of the music. The choir adds a bit of power during a wild, Goldenthalesque segment, but Arnold rarely makes use of it again. Indeed, it is amazing to see how much might he can release without calling upon the human voice: he has trumpets blaring, violins screeching, flutes fluttering at the top of their register, while tubas groan and bass drums hit the beats with mighty vigor, with nary a choir in earshot.

The percussion is a much livelier member of the orchestra here than in Arnold\'s Independence Day. The composer utilizes tribal percussion for the first time in "Joe Gets a Bite / Godzilla Arrives". Godzilla\'s Theme once again towers and groans before the rhythmic elements really kick in and the chase is on to the sound of a syncopated variation on the monster\'s anthem. The percussive attacks return in "1st Helicopter Chase / Godzilla Swats a Chopper", an immensely enjoyable piece of orchestral action music, at once hummable, toe-tappable, and grin-inducing. Both string and brass ensembles are in superb form, but it\'s the percussive accompaniment that really shines, as well as the crisp recording. Arnold shuffles in Godzilla\'s Theme and the Origin Theme throughout the piece while also calling upon what would become known as the James Bond danger motif (those four descending notes), which can clearly be heard at the 1:40 mark. Lighter, more nimble percussive figures can be heard for the baby \'Zillas in "Baby \'Zillas Hatch", as well as a rhythmic variation on Godzilla\'s main theme. All this brilliantly orchestrated action music climaxes in one of the best cues on the album, "Big G Goes to Monster Heaven". The heroic melodies are allowed to roll onto the scene over rapid bursts from the snare drums. Big G\'s Theme reaches its boiling point once again before a rising dramatic line, fiercely punctuated by drum hits and straight out of Independence Day\'s climactic confrontation, openly declares the humans\' resolve to be final. The orchestral muster grows and grows, the trumpets gaining in confidence, before one final stretch of heart-pounding percussion. The choir then painfully moans the Origin Theme, accompanied by aching harmonies for the violin section, culminating in one of Arnold\'s most tragic pieces of choral writing yet. For Arnold\'s handling of the action alone, Godzilla earns its place alongside the best pounding scores of the \'90s.

Outside of those heart-racing sequences, Arnold fills the score to the brim with a wide array of themes, some ominous, others intrepid. It is a shame that most of this baggage seems like reshapen leftovers from Arnold\'s slightly more memorable Independence Day. A longing version of Nick and Audrey\'s sweet melody in "Nick Gets Fired" sounds lifted straight out of "El Toro Destroyed" from ID4. Godzilla\'s "Evacuation" also bears striking similarities to the previous score\'s own "Evacuation" cue, while the very structure of "Nick\'s Big Speech" narrows the gap between its central theme and the President\'s Theme from Independence Day. Stylistic flairs from Stargate and Tomorrow Never Dies can also be perceived, but it\'s clearly the 4th of July actioner that is used as a template for the melodic material of the piece, with the conspicuous exception of Godzilla\'s Theme, an undeniable facsimile of Herrmann\'s Cape Fear title theme which, when heard in the context of Emmerich\'s movie, might herald the appearance of Robert De Niro and not a giant lizard in the viewer\'s mind. To be fair, though, Arnold\'s themes, whether made from recycled parts or not, are highly effective and strongly orchestrated and rarely detract from the main purpose of the music: to make the pulse pound in our veins.

La-La Land Records\' complete release of David Arnold\'s monumental score to Godzilla manages to rescue one of the few redeeming parts of that DOA piece of commercial trite. Its brilliant sound quality allows us to fully indulge in the composer\'s orchestral extravagance: his portentous brass calls, his frenzied violin figures, and his percussive mayhem. What it also provides us with is the stunning possibility of closing our eyes and letting the music dictate a much, much better movie. As the Ebert and Siskel figures in the movie might say, two giant salamander claws way up.

N.B.: Two pieces of additional information. First of all, I would have mentioned the veritable descriptive power of the liner notes in my review were it not for its obsequious connotations given the fact that the notes\' author is my editor. Indeed, Dan Goldwasser\'s liner notes serve as a historical backstage pass, a much appreciated background narrative to a score that warrants it. Also, a completely self-indulgent note to the effect that this is my 100th review and, boy, I just realized: I really need a life.