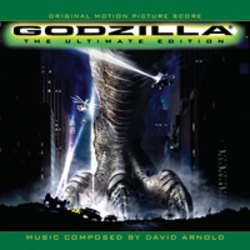 Following great success on Stargate and Independence Day, it was no surprise that Roland Emmerich would return to composer David Arnold to compose the music for the film.

Arriving in Los Angeles in 1997 to work on Godzilla, Arnold found himself standing before a new set of creative challenges, which included frequent rewriting or rerecording portions of the score due to a constant flow of last minute changes.

As a result, music was, more often than not, recorded to blank footage. Many alternate cues were also produced in an attempt to anticipate the action in several major sequences that CGI animators were still rendering. Arnold was able to overcome these obstacles, producing what many consider to be one of the finest orchestral scores of the 1990s.

The music was conducted by Nicholas Dodd and mastered by James Nelson at Digital Outland. The booklet contains new liner notes written by author David Hirsch.

Previously released on compact disc in 2007 and difficult to find, Godzilla returns to the market again, on 3 CDs, including the complete score to the film, along with a selection of bonus tracks on the first two discs and the original planned album presentation of David Arnold's score on the third disc, previously only available as a rare promotional release.

Godzilla: The Ultimate Edition is a limited edition release of 3,000 units.