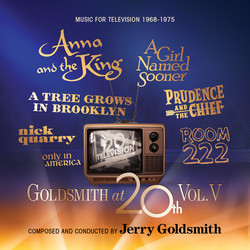 La-La Land Records and 20th Century Studios proudly present La-La Land's 600th release - a new 2-CD collection of classic Jerry Goldsmith television music composed for 20th Century Fox: Goldsmith at 20th Vol. V – Music for Television 1968-1975, including music from Anna and the King, A Tree Grows in Brooklyn, Nick Quarry, Only in America, A Girl Named Sooner, Prudence and the Chief and Room 222. The Goldsmith at 20th Collection brings back out-of-print favorites while also debuting previously unreleased music, with new authoritative liner notes and unified packaging sure to please avid collectors but also serve as a perfect gateway for listeners experiencing this music for the first time.

Volume V showcases Goldsmith's original television work at Fox between the years 1968 to 1975. The composer's genius, experimentation and creativity are on full display within this presentation, demonstrating that Goldsmith never "wrote down" for TV and that the work was some of the most colorful and heartfelt of his career.

Premiering for the first time on this release are expanded presentations of Anna and the King, and A Tree Grows in Brooklyn (Tree is presented in stereo) and the world premiere of music from the TV pilots Only in America and Prudence and the Chief.