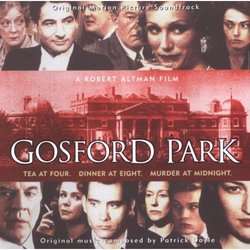 Gosford Park, directed by Robert Altman, is a bland anthropological study masquerading as a murder mystery.  Despite the limited ambitions of the film, the music score by Patrick Doyle is effective and surprisingly well-developed.

What is most striking about the film is its low standards of storytelling.  Ostensibly, the film is about a segment of 1930's English high society getting together at the country estate of a surly lord for a weekend of hunting and fine dining.  The film holds a treasure trove of talented actors, from Helen Mirren to Maggie Smith, but uses them mostly as set pieces.  Once the lord is murdered, the film is ostensibly a murder mystery, but there is little mystery about who did it and why.  What Altman really wants to do is explore the nuances of English high society in the early part of the 20th Century, with an occasional dis on Americans, using an inane producer and actor from Hollywood observing the weekend's festivities.  The resulting study is cute but never terribly insightful, and though the audience is never bored, they come out wondering why they were watching the film in the first place.

Ironically, despite the low standards of the script, Patrick Doyle does a very admirable job with the soundtrack.  As a matter of fact, when one listens to the soundtrack after seeing the movie, one wonders if there were scenes he or she missed, given the sense of depth conveyed by his rich tunes.  The main objective of the score is twofold, convey the time and place, and convey a sense of both darkness and mischief, and Doyle succeeds on both fronts.  Though predominantly instrumental, the score includes some nice vocal pieces that take one back to the period, sung by the actors in the film.  The instrumentals do a good job of creating a dark, emotional atmosphere from the start, so much so that it almost creates an expectation of depth that the film itself never quite matches.   Toward the end of the film, we learn certain dark secrets that are certainly tragic, but the impotent direction makes these realizations unaffecting; the music is the only thing that really pushes us to feel much about the characters.

The only criticism is more of a back-handed compliment.  The score is rich, layered, and a pleasure to listen to, basically making it far more accomplished than the film, and in so doing, calling out the shortcomings of the work. In conclusion, this soundtrack, though not a masterpiece,  is good for both folks who like the film and those who want nice, mostly instrumental period music that is perhaps a bit on the melancholy side.  This is not Trent Reznor, but if you like this style and era, this soundtrack will be a pleasure even without seeing the film.