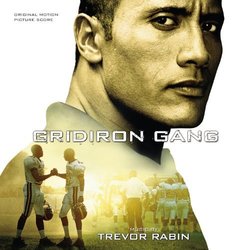 Following on the heels of one of his best scores to date, Trevor Rabin has been quite busy in 2006, with a number of films all released in the early fall. In 2005, Rabin showed a different side to his scoring abilities with The Great Raid. For Gridiron Gang, Rabin returns to his orchestral action style best represented by National Treasure, which has close similarities to parts of Gridiron Gang. The score features a strong theme and serves as a powerful underscore for the sports film, but it does not give Rabin much of a chance to do anything new.

Rabin often uses a very recognizable technique for writing opening and finale cues, the former introducing the theme slowly and building it, the latter performing the theme with a full orchestra, yet restraining the tempo while strings race along behind it. Both are used in Gridiron Gang. "Camp Kilpatrick" is a faster cue that opens the album with hints of the main theme, which is finally performed in full in "We\'re Better Than This". "Celebration Epilogue" is the finale cue. The tracks seem to be out of order, as often occurs on Rabin albums (American Outlaws, Deep Blue Sea).

At the core of the album is a 13 minute main theme action suite, "We\'re Better Than This" which is broken out into three parts. The first introduces the theme; parts 2 and 3 appear later and consist of most of the action music on the soundtrack as well as the most developed statements of Rabin\'s main theme. For fans who are reluctant to have the entire album, these three cues together make an excellent sample of Rabin\'s score. The second two parts feature Rabin at his best action writing with soaring brass underlain by racing strings. Despite similarities to past works, especially the orchestral parts of National Treasure, one has to admire Rabin\'s ability to pull certain emotional string to good effect.

Other cues utilize his theme as well, but usually in smaller doses. "Training Day" features a very slow version on the piano and woodwinds and "Rap Up" does the same on solo horn. "Flowers" and "Junior Returns" feature the full orchestra. Coming in at just under an hour, the album does not feel overly long, but again, except for diehard Rabin fans, the three part suite is probably enough for most.