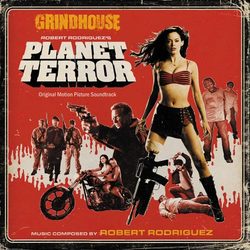 Sometimes you think someone else did a soundtrack review and then after the fact you realize, there it is, untouched and uncommented on.
The first movie of the Grindhouse double feature, Robert Rodriguez\'s Planet Terror is not really fully representative of Grindhouse cinema. As many before me have said, it is more of an early 80\'s action/horror movie pastiche. The movie would much more likely to have played in a mall multiplex than a grungy second-tier theater. The best analogy I\'ve heard was that you could call Golan-Globus the movie, and I can\'t argue with that. Like the movie, the soundtrack is an indulgence for Rodriguez. It seems like an outlet for ideas that he was itching to do but didn\'t ever get a proper context to. Where else could he have fit in an extended John Carpenter homage which fitting in his own eccentric elements as well?

And there\'s plenty of Carpenter here. Action cues like "Police Station Assault" and "Zero to Fifty in Four" reference the drum machine synthesizer score of Assault on Precinct 13 and horror stings throughout the album are reminiscent of Prince of Darkness. The second half of "El Wray" sounds like it could have come straight from Escape from New York.   Other tracks show a Brad Fiedel influence, the romantic reprise of the main theme ("Cherry", "The Ring in the Jacket") uses a very Terminator styled piano solo.

Rodriguez collaborates again with various artists on specific motifs of the film. Tracks with the sickos are co-written with Graeme Revell ("The Sickos" and "Melting Member"). They are very similar to work done on From Dusk Till Dawn, only now with a trash house industrial beat. These are the weakest tracks on the album as the modern sound does not connect organically with the rest of the album.  Only "Hospital Epidemic" is fun with catchy opening beat. On the other hand, the tracks co-written with Carl Thiel are some of the best on the album. These tracks tie to the domestic squabble conflict between Josh Brolin and Mary Sheldon. The tracks ("Doc Block", "His Prescription... Pain", "Dakota") are pitch perfect with intentionally cheesy synthesizer echoes and Moog piano stings.

I\'ve said previously that there\'s no depth or complexity to Rodriguez\'s music. And while his work is still on the surface, he has been getting more complex.  The main theme ("Grindhouse Main Titles") is a repetitive 6-note motif that uses the same wailing sax from Sin City. It may be the simplest theme he has ever written but it is one of his most versatile. There\'s surprisingly solid thematic development here as Rodriguez runs the motif efficiently through many of the above-mentioned tracks. When the third act comes, Rodriguez\'s lets his own style come to the surface (Spanish guitar, Morricone references) and gives the theme a full orchestra accompaniment in "Killer Legs". It fits with many of the genres he\'s referencing and gives the score structure.

Rodriguez has always utilized his actors for songs and here Rose McGowan sings several songs. This follows in the trend of using exploitation movie stars like Pam Grier to sing. The problem is Rose does not have much of a voice. In two of the tracks she\'s doing vocal scats more then singing.  Rodriguez covers this up in "Useless Talent #32" with over-processed pop beats. The only moderately successful track is "Two Against the World" because the music arrangement is much simpler.

When you inherently design a score to be a guilty pleasure, it is easy for the album to go off blindly in one direction. While there are inconsistent tracks, overall the indulgences are worth having.