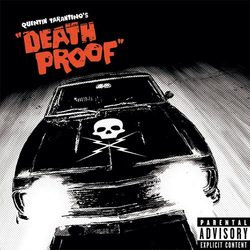 Death Proof is the second segment of the exploitation double-feature Grindhouse, Quentin Tarantino\'s tribute to "car" movies of time, like Gone in 60 Seconds and Vanishing Point (which both directly referenced in the movie). It\'s a concentrated dose of 70\'s nostalgia filtered through that uniquely familiar QT filter.

This album is everything you\'re expecting from a Tarantino soundtrack, except it\'s a simpler, more focused soundtrack that distills a more specific aspect of his musical preferences. While Jackie Brown focused more on funk and blaxpoitation music, Death Proof emphasizes Tarantino\'s love of 70\'s roadhouse rock. The movie literally takes place in supercharged cars and bars, so there\'s a bunch of rousing foot stomping 70\'s tunes (T.Rex\'s "Jeepster" and Pacific Gas & Electric\'s "Staggolee") with a little bit on the verge of the 80\'s ("It\'s So Easy"). Like Kill Bill, there are several references to movie scores by Italian composers. This time it is from Ennio Morricone\'s Cat o\' Nine Tails ("Paranoia Prima") and Pino Donnagio\'s Blow Out ("Sally And Jack"). In true fashion, you have some cruising 60\'s surfer rock for opening titles (Jack Nitzsche "The Last Race"), some low-key R& B ("The Love You Save (May Be Your Own)" and "Baby, It\'s You") and some funk ("Down In Mexico"). And of course, some audio clips from the movie - otherwise it wouldn\'t be a Tarantino album.

It also wouldn\'t be a Tarantino album if there weren\'t at least two or three obscure songs that he makes iconic. Songs so specifically placed that we can no longer associate them with anything else.  This time it is Dave Dee, Dozy, Beaky, Mick & Tich\'s "Hold Tight" and the bouncy closing credits track, April March\'s "Chick Habit." "Hold Tight" is a breezy 60\'s Brit Rock with a great bass rhythm and Tarantino loves his syncopated drumbeats. The song (played right before the first car wreck) is reinterpreted as a creepy ode to obsession (like the dead on use of"Hurdy Gurdy Man" in Zodiac). Meanwhile the cheeky "Chick Habit" is a remake of a 1960\'s of the France Gall/Serge Gainsbourg song, only this time in English. You know that within itself would tickle Tarantino\'s fancy. It clearly states the moral of the story, telling Stuntman Mike to "hang up the Chick Habit" as he gets his well-deserved comeuppance.

This is not one of the great Tarantino soundtracks but then again, he has never had a bad one. The movie (and the album) is meant as a fun indulgence and to use an Austin metaphor, if Kill Bill is a full Salt Lick plate of ribs and brisket, Death Proof is a great order of queso and chips from Kerby Lane.