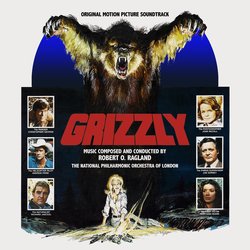 Dragon's Domain Records is excited to bring Grizzly to compact disc for the first time, featuring music composed and conducted by Robert O. Ragland, featuring orchestrations by Jack Hayes, performed by the National Philharmonic Orchestra of London. Grizzly is a limited edition release of 500 units.