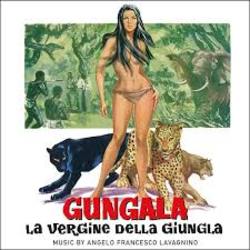 Starring Danish beauty Kitty Swan, Gungala, Virgin of the Jungle is an erotically charged jungle adventure featuring a mystical gemstone, angry natives, naive explorers and a mostly mute European beauty who is revered as a Godess. The film lead to a sequel and brought many similar jungle roles for actress Kitty Swan, whose career was cut tragically short by a location shooting accident.

The music by Angelo Francesco Lavagnino builds upon tribal drums, choral elements and an orchestra favouring low strings and brass. Gungala herself gets a seductive theme whose hypnotic quality recalls the sly movements she shares with her pet panther. Other themes include a stinger for the gemstone and great romantic cues for the softcore love sessions.

This CD marks the world premiere release of the score, mastered by Enrico de Gemini from pristine stereo firs-generation master tapes. The 8-page booklet by Gergely Hubai discusses the movie, the composer and its music