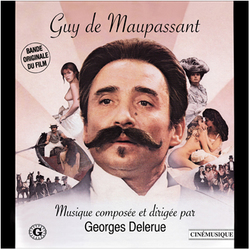 Georges Delerue is making a comeback at Disques Cinémusique with the digital premiere of his music for the movie Guy de Maupassant, directed by Michel Drach in 1982. This release will be a surprise for many fans since no excerpt of the soundtrack LP has ever been reissued in its original form on any of the numerous compilations devoted to Delerue.

Starring Claude Brasseur, Jean Carmet and Miou-Miou, Guy de Maupassant is based on the life of the famous French writer. The composer recreates the mood of 19th century Paris through a series of musical numbers that carry us from carefree social gatherings to the anguish of a declining career, undermined by disease.

To complete this 34 minutes recording, we include flute and guitar arrangements of themes composed by Georges Delerue for other French movies, as well as an extended orchestral version of Fanny's Theme from Guy de Maupassant. These five tracks where originally featured on two previous DCM releases. 12-page booklet.