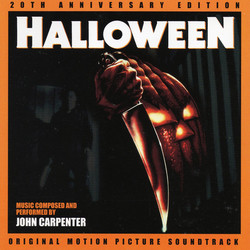 When working on the re-release of the score to Halloween, it was decided that this would be a "Story CD" of the movie, combining sound effects, dialogue, and of course, music. This would be in addition to the previously released score – all of which have now been remastered and restored in stereo for this 20th Anniversary CD.

has one of the more memorable themes in horror movie history. Simple and effective, this theme has driven itself into world culture, and can rightfully be placed on the same shelf as Jaws and Star Wars in terms of memorable themes. There are multiple themes throughout the film, all of them appropriately creepy. Unfortunately, they are also repeated numerous times, and that constitutes the bulk of the music on the CD.

Those who are soundtrack purists might be dismayed that there is dialogue on this CD. But as stated previously, it was fully intended to be a "Story CD" – by listening to the CD in its entirety, you get a sense of the movie, and relive it's more powerful moments. The remastered dialogue and sound effects are much clearer than I remember, and the stereo separation is top-notch. No doubt this is the type of effect we might be hearing when the 20th Anniversary DVD edition of the film comes out in the Spring (a little late, but close enough) with the expected Dolby Digital 5.1 soundtrack.

If you already own the original Varese release of Halloween, you probably don't need this one. But for those of us who didn't have the opportunity to get the CD (which went out of print a while back), this re-issue allows us the opportunity to remedy a situation that was totally unacceptable.