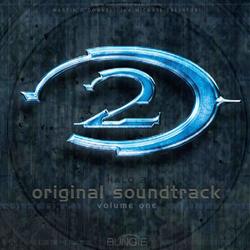 Following up on one of the most popular video games ever, Halo 2 had a lot of expectations to match. From the response to the game, it did, featuring better graphics and more action while preserving the original feel and play of the first Halo. To maintain the Halo soundscape, composers Martin O'Donnell and Michael Salvatori return as well, but they also bring along an edgier, revamped style of music. The score has the same general feel, with primarily synthesized action music. This sequel score is actually a bit more mellow, with some ambient cues ("Orbit of Glass") and others featuring more of the trademark Halo haunting male vocal theme than the percussive electronics from the first (i.e. "Perilous Journey"). "In Amber Clad" has a edgier rock feel, which is introduced immediately with "Halo The Mjolnir Mix", which is a revamped, electric guitar-driven version of the Halo theme. Another standout cue is "Ghosts of Reach" which features some great percussion, synthesized string chords, and the chorus theme. Many of the cues are very similar to the original score ("Peril").

What makes this soundtrack more hard rock-influenced is the additional songs besides O'Donnell's score. Mixed in with the score tracks are some hard rock songs by Breaking Benjamin and the recent Grammy Award nominee Hoobastank. Both songs are good for fans of the groups, but are not particularly significant contributions to the game. Similar to Adema's contribution, "Immortal", to Mortal Kombat: Deadly Alliance, the songs are to inspire album sales, though some of the lyrics are appropriate to the game (e.g. "Only the strongest will survive" from "Blow Me Away"). "Never Surrender" is an electronic remix of the Halo theme by Nile Rodgers and Nataraj. The most interesting addition to the rock-influenced part of the album is by Incubus. Spaced throughout the score is what one could call a rock symphony entitled "The Odyssey" and broken into four movements. The first movement - the only one with a title, "Follow" - starts with Incubus' version of the Halo choral theme before breaking into their own music. "The Odyssey" is a drawn-out instrumental rock song, with some very good guitar performances, as well as a very intricate and fast-paced percussion cue at the start of the 4th Movement. The "symphony" ends with an electronic noise like shutting down a computer.

Halo 2 benefits from the wide array of artists involved with the project, which gives it a harsher edge that is appropriate for the upped-action of the sequel game. However, despite a few attempts as in Incubus' "Follow: 1st Movement of the Odyssey", there is little cohesion, even in O'Donnell's score. There are some very good musical moments in both the score and the rock-symphony, but the album comes up a bit short. It is a soundtrack rather than an inspired-by album, as the music is all featured in the game, but I would have liked to see the composers take their music in a new direction rather than bringing in rock artists to do it for them. However, the music does its job and delivers a rock-edged, fast paced soundscape to drive players through the game.