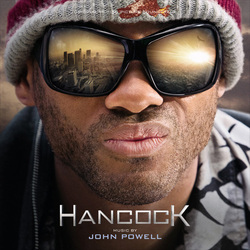 The score for Hancock is a morsel of music goodness. It is filled with little quirks that stand out for the conscious listener. Hancock disappointed many movie critics, but this critic liked it and he enjoys the score even more. If it had not been for the quirks that Powell placed in the score, it could have been easily dull, but nay he included them and I am thankful, for it really gives an interesting listen, and over all, the score is fun... Plain unadulterated fun.

The case in point can be seen with the track, \"French Asshole\". The track features a little humor while Hancock is being gilded on by Michel played by Daeg Faerch. I say its humor because of the whole idea of the finger snaps. Let me explain, Michel is a French kid that beats up on Aaron Embrey, it\'s implied that he\'s rather ruthless to young Aaron and thus a violent aspect is at the core of their relationship. There\'s a whole mess of allusions happening here, the stereotypical Frenchman wears a beret and a white and black-stripped shirt. The writers in turn stereotyped this during the 50\'s for the Beat Generation, or Beatniks, as they were known. Society at the time saw Beatniks as violent and anti-establishment and they did beat poetry, which had some times for meter, finger snaps. This comes full circle as Michel is wearing a stripped shirt. Once you know what\'s going on it\'s funnier in context I assure you.

A more sensitive track comes in the form of \"Getting Therapy\" with its soothing mellow strings. The whole use of strings and light percussion with the inclusion of flute gives it a warm feel; with its flowing melody it is one of the more elegant tracks on the album. The piece brings heart to the scene of Hancock in group therapy and gives it some leverage.

The two tracks that I get the most enjoyment out of are the last two on the album, \"Death and Transfiguration\" along with, \"The Moon and the Superhero\" with Powell\'s skills as a composer I get the impression he did not hold anything back with the final two cues. That said it is with that in mind that these two tracks really get things going, both moving and heroic. Powell\'s brass work is awesome. \"The Moon and the Superhero\" is just a good track, and I feel that the musicians really put their heart into the theme, and it sounds it. The theme is strong and uplifting and really works with the movie.

Critics may have panned the movie, but the score is excellent work. Powell has redeemed himself in my eyes delivering a strong score for a movie I happened to like and enjoyed seeing, and I think the score was part of the reason I enjoyed the movie as much as I did.

One last track I would like to point your attention to is \"Hollywood Blvd.\" with its funky groove about midway through. That has to be one of the most fun tracks on the entire album; it gets that booty a movin\' and yet oddly enough is during a climatic scene in the film. Way to go Powell, make me dance during the drama. Personally I say pick the album up, it\'s good, there\'s a lot of fun to be had in it.