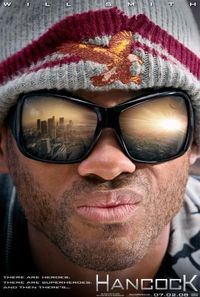 2008 is definitely turning out to be the summer of the super-hero. Between Iron Man, The Incredible Hulk, Hellboy, The Dark Knight and heck, even Kung-Fu Panda, there\'s a lot of saving going on. Then there is Hancock. Played by Will Smith, John Hancock is the anti-superhero. Or rather, the reluctant one. No one knows much about him, and he doesn\'t care. He saves people only to get them to shut up and stop asking him for his help. He is a sloppy drunk, sleeps on a bus stop bench, and doesn\'t care that he causes more damage in the process of saving people. The film opens with him dispatching of some gunmen by throwing their SUV onto the top of the Capitol Records building. Frankly he\'s a bit of a jerk, and the people of Los Angeles have had it with him. When a warrant for his arrest is issued, he is in need of being rescued himself. Enter Ray Embrey (Jason Bateman), a PR man who hasn\'t had the best of luck with his charity idea. After being rescued by Hancock, he takes the superhero under his wing and sets about reforming Hancock\'s image - much to the unhappiness of his wife Mary (Charlize Theron) who seems to want to protect her son Aaron from Hancock\'s influence. The first step is to get Hancock to surrender to the authorities, and go to prison - the idea being that with crime on the rise, they\'ll have no other option than to go back to Hancock for his help, thus freeing him from jail.

As Hancock tries to better himself and be a more responsible superhero, we learn a bit more about his background, and the reasons that Mary is so suspicious of him. Directed by Peter Berg, the story is a bit loose, since a lot seems to have been cut out of the film, making things seem a tad disjointed. Characters don\'t behave the way you would expect - and worst of all, Hancock isn\'t even a likable person. It\'s not entirely clear why Ray seems so compelled to help out Hancock, but even if you can accept that idea, you would think that Ray would be just a little upset when his kitchen is virtually destroyed. Instead, it barely seems to phase him.

The visual effects are a mixed bag as well. Some shots look great, but then anytime Hancock is flying around the city, the compositing looks really cheap. The music by John Powell is serviceable, and doesn\'t really kick into superhero mode until the climax, which is where I felt the score started to work well. The rest of the time, it\'s got a lot of the same guitar-heavy moody score that Berg had in The Kingdom and Friday Night Lights.

In the end, Hancock isn\'t a very good movie. Trying to hold a bunch of action sequences together with a nonsensical storyline and an alcoholic superhero who we can\'t relate to or care about doesn\'t make this a movie to run out and see. At least it\'s blessedly short.