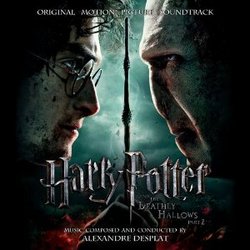 John Williams expressed interest in returning to the Harry Potter series to score Harry Potter and the Deathly Hallows: Part 2 and, although director David Yates was eager to work with Williams, they couldn't work out scheduling conflicts. Instead, Alexandre Desplat stepped in to provide the score.

At the core of Deathly Hallows: Part 2 is "Lily's Theme" (Track 1), a haunting sort of lullaby in solo female vocals and low strings that conveys longing and regret for the tragic but heroic sacrifice Lily made for Harry. It illustrates Professor Snape's connection to Lily in "Snape's Demise" (Track 16) as he says with his final breath, "You have your mother's eyes." The theme conveys a soaring sense of freedom reminiscent of Williams' majestic "Buckbeak's Flight" from Prisoner of Azkaban in "Dragon Flight" (Track 5), tenderness for Harry's reunion with his mother In "The Resurrection Stone" (Track 19), and culminates in "Voldemort's End" (Track 24) as the Dark Lord is destroyed.

We hear a majestic theme for the defense of Hogwarts in "Statues" (Track 9) that adds tremendous gravity to the battle sequences and heightens the sense of awe and grandeur. Returning from Deathly Hallows Part 1 is the theme from "The Obliviation" highlighting the sacrifices the main characters make, reaching great emotional depth in "Harry's Sacrifice" (Track 18) and "Harry Surrenders" (Track 20). The "Band of Brothers" theme from Part 1 returns for moments of heroism and reunion such as in "Neville" (Track 6) as well as the Horcrux theme in "Underworld" (Track 3).

Alexandre Desplat's score for Deathly Hallows Part 2 could hardly have been more satisfying and thrilling, delivering new material that is stirring and emotional while bringing back familiar themes from previous films. "Hedwig's Theme," the iconic main theme for the series by John Williams, hasn't been heard this many times on a Harry Potter soundtrack since The Sorcerer's Stoneby Williams himself. Its iterations range from celeste, strings, or harp to epic brass and percussion. "Dumbledore's Farewell" from Half-Blood Prince by Nicholas Hooper is heard as Dumbledore reveals that Harry must die. The epilogue scene where the main characters send their children to Hogwarts brings the series full circle, to its roots, and Desplat does the same with the music, using Williams' "Leaving Hogwarts" cue from the first film and the concert arrangement of "Hedwig's Theme" for the end credits. Incorporating these cues by Hooper and Williams into the film greatly enhances the sense of nostalgia and musical continuity for the series and it is therefore very unfortunate that they are absent from this album.

Alexandre Desplat's score for Deathly Hallows Part 2 completely delivers, full of moving, emotional themes and epic action material. Familiar iconic themes from John Williams and even Nicholas Hooper bring cohesiveness, nostalgia, and conclusion to the final installment in the Harry Potter series, bringing us an experience that is beyond satisfying. It's Magic.