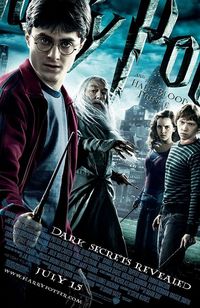 Harry Potter and the Half-Blood Prince

After the relatively uninspiring outing that was Harry Potter and the Order of the Phoenix, I was a little apprehensive about the next chapter in the Harry Potter series, since most of the same people who did the last film were coming back for the new one. Fortunately, screenwriter Steve Kloves (who wrote the first four adaptations) returns for this one, and the improvement is palpable.

After the events of the last film, it is now widely known that Lord Voldermort (Ralph Fiennes) has returned, and he’s after Harry Potter (Daniel Radcliffe). Though he’s not really in the film at all, Voldermort’s loyal gang of Death Eaters are busy trying to work out some kind of devious plan to break into Hogwarts, with the help of Draco Malfoy (Tom Felton). Meanwhile, headmaster Professor Dumbledore (Michael Gambon) wants Harry to use his fame and influence to gain important information from the new faculty member, Professor Slughorn (Jim Broadbent). In the potions class that Slughorn teaches, Potter gets an old used book which is inscribed “property of the Half-Blood Prince”. Notations and spell modifications are all over book, which Potter uses to his advantage. While the mystery of who the “Half-Blood Prince” is occupies Potter cursorily, his friends Hermione Granger (Emma Watson) and Ron Weasley (Rupert Grint) are dealing with plenty of teenage high school romance angst, with a few different love triangles forming and hearts being broken left and right. By the time the film ends, we learn what the powerful information was that Dumbledore was trying to get from Slughorn, and the Dark Lord’s plan shifts things drastically – forever changing Hogwarts and the situation Harry Potter finds himself in, setting everything up for the two-part finale coming in 2010 and 2011.

Directed by David Yates (who directed the previous Harry Potter and the Order of the Phoenix), the film is certainly a step up from the last outing, with a bit more emotional drama. Most of this can be attributed to the aforementioned Steve Kloves, who effectively captures the teen angst moments, and condenses a rather large story unto a well rounded 2.5 hours. The problem is that we don’t get much mystery in the film – we see a lot of things happening, but with the exception of the nature concerning Slughorn’s memory, there isn’t as much in the way of “woah I didn’t see that coming”! In fact, when we find out who the “Half-Blood Prince” is, it’s done in such a way that it feels like they had forgotten about it, and had to quickly insert that tidbit into the film, without any real importance or meaning attributed to it.

The film looks good, shot by Bruno Delbonnel (Amelie), and the visual effects are certainly a step up. The quiddich match in particular is a very well done piece of filmmaking. Unfortunately, composer Nicholas Hooper provides yet another uninspired underscore that feels more in place with a BBC production than a major studio feature. In fact, one of the more engaging score moments is the quiddich match, where John Williams’ motif from Harry Potter and the Prisoner of Azkaban makes a surprising and very welcome return. If only the rest of the score had as much energy and drama as that one cue.

Things are certainly coming towards the end for Harry Potter, and where Order of the Phoenix slogged through a bunch of stuff just to get us one or two pertinant pieces of information, The Half-Blood Prince sets up a lot of stuff for the finale, and does so with more character and emotion. It’s not perfect, and suffers from a few rushed aspects, but it was never boring. And with a Lord of the Rings styled pre-climax ending, we can only hope that the final two films are going to deliver.