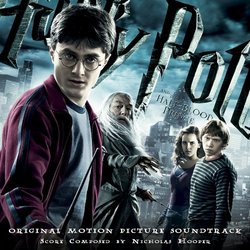 Harry Potter and The Half-Blood Prince

Performed by
The Chamber Orchestra of London

Nicholas Hooper, composer for Harry Potter and the Order of the Phoenix, returned to score The Half-Blood Prince. Hooper's style is much less sophisticated than that of John Williams or Patrick Doyle as many noticed with his work on Order of the Phoenix. The Half-Blood Prince has less action and is driven more by emotion which led Hooper to go for an even simpler approach.

The character of Professor Dumbledore is represented in the movie by the musical themes in "In Noctem" (Track 2), a choral piece about accepting death without fear. Dumbledore's theme evokes a sense of mystery and gloom in telling this dark story. It was to be sung by the Hogwarts Choir just before the Headmaster's demise (the scene was deleted from the movie). In "Dumbledore's Farewell" (Track 26) a slower variation is used where swelling strings express feelings of loss, grief, and reverence.

Secondary themes include ones for Malfoy, Harry and Ginny, Harry's mother, and the Death Eaters but are very subtle and don't call attention to themselves. Returning from the fifth film as well is the "Possession" theme. With Hogwarts set in Scotland, its great to hear a scottish sound in "Farewell Aragog" (Track 17) and "The Weasley Stomp" (Track 28). Lighter moments are heard in "The Slug Party" (Track 15), "Living Death" (Track 8), and "School!" (Track 13).

Hooper expertly incorporates iconic themes by John Williams beyond the main "Hedwig's Theme." "Ron's Victory" (Track 11) and "Of Love And War" (Track 19) use Williams' Quidditch theme from Prisoner of Azkaban in a very exciting and refreshing way.

Present on the album but not heard in the film are "Wizard Wheezes" (Track 6) and "In Noctem." "The Weasley Stomp" and "Of Love And War" were replaced by "Fireworks" and "Dumbledore's Army" from the fifth film.

All in all, Nicholas Hooper delivers a wonderful score for Half-Blood Prince, full of variety ranging from playful and entertaining to ominous and heartbreaking. Providing engaging new material while reprising his own themes as well as those of John Williams, this album is a wonderful listen and any fan of the music for the Harry Potter series should make it a part of their soundtrack collection.