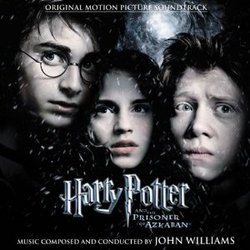 Harry Potter and the Prisoner of Azkaban

Review: Harry Potter and the Prisoner of Azkaban

His last film score was Catch Me If You Can, back in 2002.  And now, after a 1.5-year hiatus, John Williams is back, and with a vengance!  His score to Harry Potter and the Prisoner of Azkaban is easily one of his best in years, and dare I suggest, his best of the Harry Potter series.  There are, I believe, a few reasons for this.  Primarily, the departure of director Christopher Columbus and the introduction of Alfonso Cuarón (Great Expectations, Y Tu Mama Tambien) at the helm.  Alfonso's vision is a much darker, less childish one.  Where the first film was all about "wonderment" and the second one about "discovery", this one is about "vengance".  The basic plot premise is that Sirius Black has escaped from Azkaban Prison, and it is feared that his target is Harry Potter himself.  When Harry learns that Black used to be his father's best friend - and he was involved in the circumstances surrounding his parent's death, Harry plans on killing Black.  Thus begins a game of cat-and-mouse as Harry tries to find Black, while at the same time discovering some hidden truths about himself and his family.  Throughout it all, the film's look is darker, bleaker, and more interesting than the previous two.  Handheld camera shots enhance the drama in certain scenes.  The visual effects are spectacular.  And of course, John Williams' score ties it all together in a magnificent way, providing us with three new themes, and plenty of delightful music.

After beginning with Hedwig's Theme from the first film ("Lumos!"), the score quickly shows off the best of what it has to offer when Aunt Marge is bewitched (accidentally) and blows up like a balloon.  In "Aunt Marge's Waltz", Williams does something he does best - plays with the orchestra.  A flighty theme starts to get bounced around between various instruments, building up to a big finale.  It seems almost effortless - you can almost picture Williams writing this with a big smile on his face.  "The Knight Bus" is one of the most bizarre tracks Williams has written in a long time.  Almost a blend between the "Star Wars Cantina" and Catch Me If You Can, this free-form jazz tune is raucous and dissonant, and has a lot of high energy as Harry is whisked through London on a magical bus.

"Double Trouble" is a song that appears briefly in the film, sung by a children's choir.  It was also used in the film's theatrical teaser.  The full version is presented here on the album, and with a medieval edge, and lyrics from Shakespeare's "Macbeth", it sets up the tone of the magic in the film.  That is, dark, ominous, and foreboding - because after all, "something wicked this way comes"!  This medieval motif is maintained in "Hagrid The Professor", as a whimsical woodwind cue.  But the two big new themes are Buckbeak's Theme, and Harry's Family Theme.  The former makes its big sweeping appearance in "Buckbeak's Flight", and soaring and epic cue that starts out with high-octane percussion before bursting into full melody.  Harry's Family Theme makes its first somber and yet hopeful appearance in "A Window to the Past", starting out on recorder, and slowly being joined in by the full orchestra.  I can't stress enough how delightful it is to hear Williams write such beautiful music, especially after such a lengthy break.

The rest of the album for the most part, is filled with incidental cues that take advantage of the themes established here.  "The Whomping Willow and The Snowball Fight" are two cues edited together from different parts of the film.  The first half is a rather exciting action cue which uses a variation on Hedwig's Theme, and the second half is a playful holiday time jaunt that easily evokes images of a playful snowball fight.  "Apparition on the Train" and "Monster Books and Boggarts" are two frightful cues that show Williams' darker side.  He evokes fear and misery through the orchestra in the first cue as we are introduced to the Dementors, and in the second, while it has some scary moments, it turns playful as the classmates learn how to defeat the Boggart.

The Quiddich cue, "Quiddich, Third Year" is a tremendous action cue, using a variation on the "Double Trouble" theme as Harry finds himself surrounded by Dementors during a Quiddich match.  In the film, the sequence is exciting and the music adds heavily to the mood.  More action ensues in "Lupin's Transformation and Chasing Scabbers" as well as a big sequence, "The Werewolf Scene".  This is not playful music - this is rather like the action music in Star Wars: Episode II.  It's brassy, bold, and keeps the tension high.  Thankfully there's a small break (on the album) with "The Patronus Light", an angelic choral cue that gives us a spiritual boos before diving back into the darkness surrounding Harry's third year at Hogwart's.  A lengthy cue, "Saving Buckbeack" takes us back to the musical territory Williams explored in Minority Report, but with a Potter edge.  "Forward to Time Past" makes clever use of a ticking clock and "reverse" sounds as Harry and Hermione figure out a method to resolve the climax of the film. (I'm trying not to give too much away, regardless of the track titles!)

A big part leading up to the finale involves the Dementors, Harry, and Sirius Black.  That's all I'll say for the sake of those who don't want anything ruined, but it takes place in "The Dementors Converge", a big choral piece as the Dementors attack Harry and Sirius, and a minor version of Harry's Family theme is used here too.  In "Finale", the Patronus Light theme and the Family Theme are used to resolve everything, and it would be a perfect place to end the album.  But lucky for us, there's a 12-minute extra cue, "Mischief Managed" which is basically the end credits.  It's long, and recaps much of what we already heard in the film.  It's a ready-made suite for those who like that kind of thing, and it sums up William's score quite nicely.

I will readily admit that my feelings for the first two Harry Potter scores have always been ambivalent at best.  I like the main themes, but the rest of the album usually turned into musical white-noise for me. However, with this album, there is more thematic material, and it stands out clearer.  A detriment to the sequencing of the album, though, is that much of the thematic material is placed up front, so the last half of the album is all over the map with action and dramatic cues.  Nonetheless, Williams is clearly at the top of his form with his score to this film, and if he's able to keep it up, I can't wait to hear what he does for the final Star Wars film coming out next year.