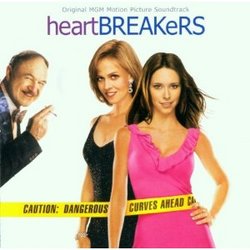 Heartbreakers is the amusing story about a mother and daughter con-team (Sigourney Weaver and Jennifer Love Hewitt) who find themselves in trouble with the IRS and need to come up with $300,000 in 90-days. Their solution? To con William B. Tensy (Gene Hackman), a billionaire with a severe smoking problem. Meanwhile, their last con Dean Cumanno (Ray Liotta) is trying to track them down, and Page (Hewitt) begins to fall for Jack (Jason Lee). It's not as confusing as it sounds. The resulting film is a rather funny one, with some great comedy moments by Hackman and Liotta, and is backed by a quirky score by John Debney (with a main theme by Danny Elfman), as well as a swath of mood-setting pop songs.

Many of the songs in the film serve as background fodder, playing for the sake of being played (in a bar, or on the radio, etc.). But there are a few that fit in rather nicely with the mood of the scene, and those are the ones that have been picked (rightfully so) to grace the soundtrack album. The light South American smoothness of "Ague De Beber" (Astrud Gilberto) and soft vocals of "Quiet Nights (Of Quiet Stars)" (Sarah Vaughan) and "The Waters of March" (Susannah McCorkie) add a quieter romantic edge to the album. Other tunes like "Infinity" (Inara George and Bryony Atkinson) and "Baby, Now That I've Found You" (Alison Krauss) keep the same level going, but "Infinity" kept popping The Minus Man into my head, as it was the first song on that album. Mason Williams' soft stylings on "Trade Winds" is a nice relaxing cue that segues into Michael Andrew and Swingerhead's slick rendition of "The Best Is Yet To Come".

There are two suites of original score included here, and while they total just a little under 15-minutes in length, I would have to say that the amount presented here is just right. Elfman's theme is slightly reminiscent of the lighter bits of A Simple Plan combined with sporadic moments that reminded me of Beetlejuice. Debney does a wonderful job in an awkward situation, taking a theme that wasn't his, and infusing it with depth, emotion, and variety. The resulting score is broad, with moments ranging from whimsical comedy, to tense action, to soft romance. The only drawback is that I never really felt that this was a John Debney score; it felt a bit too much like an Elfman score. But maybe that's what they were going for?

Running a little over 53-minutes, the soundtrack to Heartbreakers is a nice example of a well done song-driven release. While there aren't any big "hits" presented, the songs are enjoyable and fit wonderfully within the context of the film, and make it a pleasure to listen to. Add to that the inclusion of a nice solid chunk of quality score, and you have Heartbreakers. I'd recommend checking out the film before rushing to get the soundtrack, but you won't find that your time has been wasted.