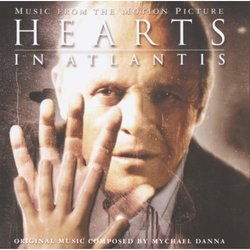 Based on the novel by Stephen King, Hearts in Atlantis is more of a coming-of-age tale in the vein of Stand By Me than any of King's other supernatural-themed dramas such as The Green Mile or Needful Things.  The story is about eleven year-old Bobby Garfield (Anton Yelchin) and his mother (Hope Davis) and how their lives change when the psychically-endowed Ted Brautigan (Anthony Hopkins) moves into the room for rent in their house.  The film harkens back to a much simpler time (the 1950s, of course) and for the most part deals with Bobby learning to grow up.  The supernatural element, in the form of Brautigan's psychic abilities - which he passes on to Bobby – is really only used as a plot device.  But does he really have psychic abilities (the type that the government would be willing to kidnap for)?  Or is it really a matter of being able to open your eyes and really understand what you see?  That part is left up to the audience, but in the end, it's the type of movie you feel good about.  Contributing to that feel-good emotion is the music, comprised of songs and score by Mychael Danna.

The film primarily takes place in the 1950s (but is book-ended by modern-day scenes), and so it's not surprising that the bulk of the soundtrack is comprised of tunes from that era.  Songs like "The Twist" by Chubby Checker, "Sh-Boom (Life Could Be A Dream)" by The Crew Cuts, and "Carol" by Chuck Berry do a great job setting the tone.  Also included are three (yes, three!) songs by The Platters, including "Only You (And You Alone)", "Twilight Time", and "Smoke Gets In Your Eyes".  Two classic instrumentals are also included, with the timeless "Sleep Walk" (who can forget that guitar!) and Max Steiner's classic "Theme From A Summer Place" as performed sweetly by Percy Faith & His Orchestra.

A dramatic film such as Hearts in Atlantis requires an equally dramatic score, but one that hits all the right emotional buttons of sentimentality, tenderness, and innocence.  Enter Mychael Danna, whose work on The Sweet Hereafter still haunts me.  Danna's score is very soft, subdued and eloquent.  Primarily written for piano and strings, "Never Really Went Away" starts off simple and calm, and slowly swells with full emotion.  "Summer Vacation" isn't as heavy, and is even a bit playful.  After the music soars for a bit, it gets a little darker – reminding us that not everything is peaches and cream - after all, the government is out to get Brautigan.

In one of the truly emotional moments in the film, Bobby discovers his best friend Carol (Mika Boorem) has been beaten up in the woods by the local bully.  With a dislocated arm, he needs to carry her up the hill.  Summoning the strength he didn't think he had, he manages to get her to safety.  The music in the scene ("The Hill") is incredibly powerful and provides you with that rush of emotion that you just can't beat.  After the music calms down, we're back to a softer dramatic motif full of understanding and resolve.

The film ends back in the present day, with the now older Bobby meeting Carol's daughter, Molly.  This cue ("Molly") is a tender recap of the music first heard in "Never Really Went Away".  It's a soft resolution to the film, and a pleasant way to end the album.

There is only 16-minutes of score on this album, and for many die-hard fans, they'll probably be disappointed.  But according to Danna, only 35-minutes of score was written, with much of it being quiet, subdued material.  As such, I'd have to say that the score included on this album is quite satisfactory, and I didn't feel like I needed more than was presented.  The songs add to the variety on the disc, and played as a whole, the entire album is a great bit of nostalgia mixed with sentimentality.