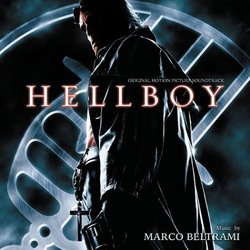 Marco Beltrami made a name for himself with horror scores (Scream, The Crow: Salvation, Dracula 2000) and has recently taken on some dark hero films (Blade II, T3). His scores have typically featured a mix of percussion, vocals, and clashing orchestration. Beltrami's latest score for Guillermo del Toro's Hellboy takes his dark approach in a new direction with bold, heroic themes and varied soundscapes to reflect different characters.

I distinctly remember, when watching Hellboy, Beltrami's music had a very strong presence in the film, with the heroic theme for Hellboy making many thrilling appearances. However, this theme only appears twice on the album and never in full ("Meet Hellboy" and "Stand By Your Man"). Beltrami's website has some sample MP3s from the score, one being a suite of the five themes in the film. I was looking forward to hearing the action theme (the last one in the suite) in the score as I remembered from the film, but it is hardly presented on the album.

Nevertheless, Hellboy is a solid album and one of Beltrami's best works to date. The five themes in the score, as identified by his website - Hellboy's, Hellboy and Liz Sherman's love theme, Abe Sapien's, Professor Broom's, and the Hellboy heroic theme - are all strong and fit the appropriate characters well. The heroic theme is a modified rendition of Hellboy's theme, both of which bring out the power and fearlessness of the character. However, the quieter themes are the highlights of the album, specifically Professor Broom's theme, which received a glorious performance in "Father's Funeral", easily the best track on the album. The other highlight is the final fight cue "Stand By Your Man" which begins with a female vocalist underscored by low brass and segueing into Hellboy's theme blasted out on the horn with marching percussion moving along behind and ending with the heroic theme in its best, though brief, performance on the album.

Beltrami does not, however, provide a rehash of past heroic scores for Hellboy. This score is quite unique in a few ways. First (and foremost in my mind because I play this instrument) is the use of a bass clarinet to create a sense of trepidation. It can be heard best at the end of "Father's Funeral" but also behind some of the other orchestrations in "Alley Fight", "Soul Sucker", and "Stand By Your Man". Second is the use of vocals in various parts of the music, one in particular, "Kroenen's Lied", which is a duet between a male and female vocalist in (I believe) German, to reflect the Nazis presence in the film. Finally, the last track "B.P.R.D." is a strange jazz-like remix that does not quite fit the tone of the film.

Overall, Beltrami presents some of his best work for Hellboy, though the album could have been a little longer. At times the music has a "historical" feel to it - reflecting the Nazis and Russian characters and time periods ("Oct. 7th, 1944") and at other times an ancient evil that birthed Hellboy. I look forward to what Marco Beltrami might do for the sequel to Hellboy, as there inevitably will be one.