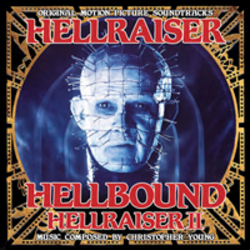 After early efforts with British avant-garde jazz-rock group Coil to compose and record music for the film did not come together, Clive Barker and Hellraiser producer Christopher Figg hired composer Christopher Young to score the film. Young was asked to write a full orchestral score for the film and, at the center of the score, a kind of diabolical waltz and what has since become one of the most well recognized pieces of music in history of horror films and helped launch the composer's career. For the sequel, Young retained a similar musical sensibility, while developing an even more robust approach, which included the addition of a choir.

BUYSOUNDTRAX Records presents Hellraiser / Hellbound: Hellraiser II, featuring music composed by Christopher Young. Both scores have been released previously on compact disc but those releases are long out of print and difficult to find.

Hellraiser / Hellbound: Hellraiser II are presented here on 2 CDs with liner notes written by author Randall Larson and music for both films newly remastered by James Nelson at Digital Outland. This is a limited edition release of 2,000 units.