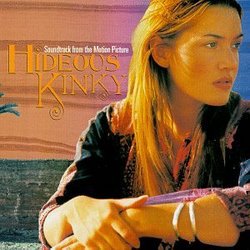 Performed by
The London Pops Orchestra

Amongst groans and giggles in the theater during the preview for this film before my viewing of Shakespeare In Love, I would expect that the target audience for the film isn't ready for it, or for that matter wants it. Hideous Kinky is Kate Winslet's first film since Titanic (Leonardo DiCaprio's first since Titanic, The Beach, is also scheduled for release this year as well) has folks like me, who do appreciate independent film, grabbing for the air-sick bag. One would hope that this story about a single mother of two small children, who leaves England for Morocco in the late 1960s, is more engaging than the trailer (which is used to sell the film to audience) shown. The music on the album for the film has all the prerequisites to set a film in Morocco and to set it in the late 60s, but remain disjoint throughout the CD as well as probably in the film as well.

On Will Record's release, we have our late 60s pop standards for film of Jefferson Airplane, chiming in with "White Rabbit" and "Somebody To Love", and Canned Heat with their staple "On The Road Again". A nice change for 60s-type soundtracks was to have a few songs by one of my favorite pop-folk artists of the past 30 years, Richie Havens play "Follow" and the Beatles "Here Comes The Sun". The song order is broken up by traditional Moroccan music, which, of course helps with supporting the setting, but when placed on the album and given to unsuspecting "western" ears, it seems out of place. John Keane is listed as composer for the film but has all of one track, aptly titled "Hideous Kinky," performed by musicians from the London Pops Orchestra.

When flipping through the CD, I naturally rested on the pop tunes since I haven't heard them in a while, and even gave the Moroccan music a try but couldn't get used to it. I suppose they would end up as either innocuous underscore or background music in the film, as usual for a western produced and directed film, but I may be surprised when it is released April 26 in the USA. For those who want to get another listen to composer John Keane's work, is current work can be found on USA Network's The Sentinel, available on Sonic Images.