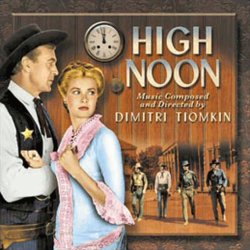 There are only a handful of Oscar-winning scores that have never been released in their entirety on CD, and most of them are from the Academy\'s early years. It\'s hard to believe that, until Screen Archives Entertainment saw fit to release it here, Dimitri Tiomkin\'s breathtaking score for Fred Zinnemann\'s classic Western, High Noon, was one of them. Prior to this, the closest that fans of the score had gotten to a substantial rendering of the score was on the excellent 1988 Unicorn-Kanchana release, \"The Western Film World of Dimitri Tiomkin\", which features three tracks – only one of them actual score – performed by the London Studio Symphony. It\'s good, but it\'s even better to hear Tiomkin\'s stunning work in its original form on this new release of material from Tiomkin\'s personal collection of acetate recordings.

There\'s something more immediate and energetic about the performance of the score in its original rendering. Obviously, it\'s going to be up to the individual listener as to whether or not the resultant sound quality flaws are severe enough to dissuade from purchasing this release. No question: the folks at SAE have done everything in their power to make the sound as vital and fresh as it would have been over fifty years ago when the score was first performed, but there are some unavoidably tinny moments. Personally, I find that the dated sound quality makes for a more authentic listening experience. It certainly feels far more connected to the film than any of the more recent digital recordings do.

Also noteworthy is the fact that this is the first time Tex Ritter\'s original vocal performance of the Oscar-winning song \"Do Not Forsake Me\" has been released in any form, though the song has been recorded countless times by artists like Frankie Laine, Ray Conniff, Henry Mancini and in a studio version by Ritter himself. (There\'s even a German release from 2001 featuring 25 interpretations of the song by 25 different artists!) But there\'s something truly special about hearing Ritter\'s original film version. His vocal is both stoic and mournful, precisely expressing Will Kane\'s (Gary Cooper\'s) frustration at having to abandon his honeymoon to take on the vengeful Frank Miller. As an extra treat, this release features two alternative versions of the song: one a demo recording that casts a decidedly sunnier light on the song than in the actual film version, the other a rehearsal that lets us hear Ritter struggling with his interpretation under the direction of the Ukrainian master himself.

Of course, the song is at the heart of this lengthy, rambling score. (There are few score-less moments during the 85 minute film – or, at least, it feels that way.) Ritter\'s vocal makes intermittent appearances to remind us of Kane\'s inner turmoil but, even more importantly, the song\'s melodic motifs are twisted and turned into almost every conceivable shape to serve the score. At the risk of sounding melodramatic, a few cues must surely rank among the most exciting ever written for film. \"Two Minutes to Twelve\" is a highlight, bringing Tiomkin\'s expressive genius to the fore as the hands of clocks all over Hadleyville count down – with ferocious percussive weight – to the doomed meeting of Kane and Miller. And the score\'s longest cue, \"First Shots Fired\", is a virtuosic display of Tiomkin\'s gift for generating suspense and a palpable sense of Kane\'s heroism.

But describing this score won\'t do it justice. You just have to listen to it and be swept away by one of the finest scores ever written for a Western. They don\'t write them like this anymore.