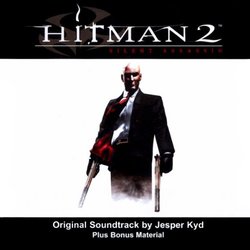 Jesper Kyd\'s score for Hitman 2: Silent Assassin follows a recent trend in video game scoring, which allows the use of an orchestra, mostly because of larger budgets for these games. Most notable are Michael Giacchino\'s works for the Medal of Honor game series. For Hitman 2, Kyd utilizes a three note theme, which can be heard interspersed at different times throughout the score. Kyd, whose previous works include the Minority Report video game, brings a style to this score similar to the sound of Jerry Goldsmith\'s militaristic orchestrations for films such as Air Force One, Total Recall, and the Star Trek franchise.

Hitman 2 opens with a male choir backed by brass, very reminiscent of Hunt for Red October or The Omen scores. The following two tracks introduce the main action theme of Hitman 2. "47 Makes A Decision" is one of the best cues, as it builds into a powerful brass anthem that reminds me of the "Summon the Worms" theme from Brian Tyler\'s Children of Dune, which is also backed by snare drums. The album then moves into the music per scene.

The difference between this score and soundtracks for movies is that each cue is written for a different scene in the game and designed to be replayed while a player is in that level or mission. Therefore, some cues seem repetitive or do not build as one would expect. However, Kyd shows that he has an extensive grasp on orchestrations for different ethnic sounds. Tracks 6 through 13 contain music from Hitman 47\'s missions in Japan, India, Russia, and the Middle East. The militaristic action music remains, but the music takes on other flavors. Woodwinds and strings are added to "Japanese Mansion" as in Goldsmith\'s Mulan, while "Streets of India" takes on a Prince of Egypt/13th Warrior pipe/flute instrumentation with lighter drums in the background.

The scoring for the two Russia tracks becomes march-like before the music moves into "Desert Sun" which could have been a cue out of Goldsmith\'s The Mummy. "The Setup" and "End Boss" were, respectively, only co-written and produced by Kyd. These tracks represent the action scoring for this video game and build to the climax of both the music and - most likely - the end of the game.

Four tracks at the end of the album are filler music to be recycled repeatedly while players are exploring the game or carrying out missions and are all fairly generic and unremarkable. Three bonus tracks end the album. The unreleased "Dreams of Istanbul" is a fun track with percussion and male ethnic vocals and ethnic woodwinds. This nearly eight minute-long track shows that Kyd is able to compose valid action music without the use of electronics, which are relied on more and more these days, especially in video game scoring. "Hong Kong Themes" is a series of cues consisting mostly of wooden percussion. The album then closes with "47 Main Title" which is the only use of blatant electronics in the score, which are backed by the orchestra. It\'s a cool action sound, something one would actually expect for a game such as this, more along the lines of the music in the popular X-box game Halo.

On album, the music seems a bit disjointed because of the shifts in location in the game, which require different ethnic feels. However, Kyd shows off his talents at orchestration and produced a surprisingly complex score for a video game. The use of a main theme is minimal, but there is a lot to like about this score, especially the wide range of instruments called upon to perform it.