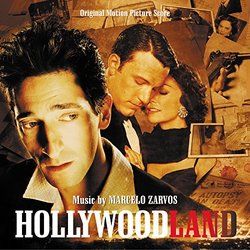 Marcelo Zarvos\'s brooding, minimalist score for Hollywoodland succeeds in creating dense, introverted, atmospheric music, perfect for the 1950s murder mystery film which it accompanies. On album, however, the score suffers loses some of its effectiveness, mainly because the variety in instrumentation needed for active listening just isn\'t there. It\'s certainly an effective, thoughtful score, but ultimately feels too repetitive in its reliance on similar techniques from track to track.

"Superman Falls" begins gently, building an element of mystery with densely layered strings and harpsichord, until the tension is released with a near-crescendo.  The next several tracks vary from foreboding and tense ("The Suit") to low-key and somewhat meandering ("George and Toni"). Subtle use of sax in tracks like "Louis Simo, P.I." and "Roosevelt Hotel", as well as piano in "The Meaning of Justice" and "The Will", are both notable for the effectively downbeat mood it creates.

"Playground" features harpsichord more prominently, and "The Morgue" has some slightly more dynamic instrumentation with piano. But by and large, there is little to distinguish most of the tracks from one another. Exceptions include the slowly building rhythms similar to what was first heard in "Superman Falls" in cues like "Mannix Estate" and "Superman Rises". Mostly however, many of the tracks feature just more of the same foreboding string passages, piano work, and harpsichord.

At least cues like "Last Night Part I" and "Last Night Part II" manage to squeeze in some variety by altering the mood somewhat; the more dramatic use of strings elicits bolder emotion, albeit briefly. The track-to-track consistency in approach certainly makes for a fluid, seamless listen, but having so many cues sound virtually the same makes you wonder if the score would\'ve been stronger if some of the more unremarkable tracks were omitted.

While Zarvos\'s restraint is certainly admirable, and his musical writing often quite nuanced, the minimalist approach seems to nibble away at his creative potential here. The underscore doesn\'t quite stand out enough on album, with many tracks having very little characteristics to separate themselves from one another. Hollywoodland undoubtedly had appropriate music to complement the on-screen drama and mystery, but on album the lack of variation doesn\'t hold up very well for active listening. Still, Zarvos certainly knows how to create a consistent and effective sense of tense reflection and melancholy, perhaps making the album better appreciated as more of a background listening experience.