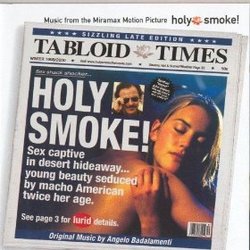 In 1999, Angelo Badalamenti wrote a beautiful score to The Straight Story (and got a Golden Globe Nomination for it), as well as a dark, tense atmospheric score to the thriller Arlington Road. He also wrote the score to a small Miramax film, Holy Smoke! starring Kate Winslet and Harvey Keitel. The film was about a young woman (Winslet) who joins a cult in India, and Keitel played the specialist hired by her family to recondition her. The score Badalamenti wrote was a rather soft, dramatic score, which provided plenty of emotional underscore for the film.

Beginning with the first score cue, "Betrayal of Ruth", one can immediately get a feel for what type of score this is. Badalamenti wrote a very string heavy score with plenty of implied tension. But his use of woodwinds and guitar to soften the tone results in pure drama. In fact, the first three tracks all sound generally alike, and I feel that they might have been better served if spread out over the CD. "Kiss All Around It", however, feels a bit different from the first few tracks, and has a great suspenseful "dancing" quality to it - you can sense a fluid motion to the music. "Waiting, Reaching, Seeking" sounds exactly like it reads - a lot of arpeggios that keep changing key, and give off an appropriate sense of "waiting, reaching, and seeking".

The most "out-of-place" track (and one of my favorite cues) is "Snappy Lipstick". A whimsical, peppy number that reminds me of a 1920's speakeasy with whistling and finger snapping - it even ends with a slide whistle! "The Celebration" seems like just a shorter version of "Maya, Mayi, Ma", a celebratory choral song that is rather uplifting, and once again out-of-place from the rest of the dramatic underscore. There are also a few songs in the film. "Holly Holy", sung by Neil Diamond, is a great way to open the album. "I Put A Spell On You" by The Angels and "Primitive" sung by Annie Lenox are also enjoyable to listen to, and do a nice job breaking up the score without sounding intrusive. This album was released by Milan Records while it is enjoyable to listen to, if you can only pick one great Badalamenti score from 1999, it would have to be The Straight Story.