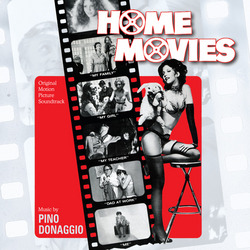 The original Varčse Sarabande Home Movies album was released in 1980. A suite of the score turned up ten years later on our CD Pino Donaggio: Symphonic Suites, a CD Club 1.0 era release. Finally, to conclude our historic year of CD Club 2010 releases, we close on this decidedly light note, with this whimsical and tuneful music from our old friend Pino Donaggio.