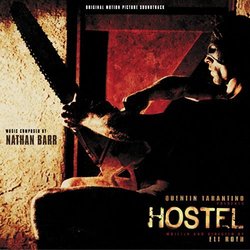 In my experience, the best horror scores fall into two categories: those relying solely on synthesizers and those fully atonal compositions for orchestra. Halloween is perhaps the most famous of those soundtracks falling into the first category: even in its quiet moments, when we are following Jamie Lee Curtis down a wind-swept street, the melodies are uneasy and disturbing. On the other end of the spectrum, Stanley Kubrick\'s The Shining made terrific use of classical avant-garde music where, although the music is produced by orchestral instruments, the resulting sound is so alien that there is no comfort to be felt in those mad, dissonant assaults on high pitches. Nathan Barr\'s score to Hostel falls in neither of these categories, yet I must recommend it outside of its movie for being an exciting listening experience, a very well crafted piece of music that might or might not be frightening in the context of the movie but which works superbly well on its own.

The movie follows three young men backpacking through the Slovak Republic in search of a place of hedonistic pleasures where beautiful Central European women can be bed just by smiling at them. Instead, they are caught in a disturbing enterprise of human slaughter and murder and must escape with their lives (and limbs) intact. The fully orchestral score by Nathan Barr opens with a schizoid, Hitchcockian motif for strings backed by powerful brass hits and unrelenting gongs. The "Suite" continues with a dreamy lullaby recalling the Amityville Horror motif and giving the score a slight neo-Classical feel with its fluttering woodwinds and plucked harps. Sultry female vocals evoke the sexual pleasures awaiting the backpackers in "Brothel", but the warm sonorous glow is cut short by loud footsteps from the contrabasses in "Guidebooks". "Village" is a breathtaking cue where the lullaby is swallowed whole by a dynamic orchestral muster, almost heroic in nature, with trumpets and cymbal crashes, slowly fading back into the lulling lullaby. The "Spa" treatment is a bit quirky and comical, with the sultry vocals returning, accompanied by a running version of the lullaby for harp.

The paradisiacal bubble bursts in "Pedicure" with low, dissonant piano hits and a great atonal wave rising among the string ensemble. The first half of the score continues with short cues of suspense and downright fright, such as "Unwell" with its nauseous strings and disorienting glass harmonica (played by the composer himself) and "Smokestack" with its agitated chase sequence featuring a cool motif for the piano. In fact, most of the chase cues in Barr\'s score reminded me of Christophe Beck\'s choice on Buffy the Vampire Slayer of always using a short, recognizable motif for all of the action music as opposed to resorting to aimless cacophony. "Mr. Serious American" is a great, powerful example of a classic Hostel chase cue, erupting through the speakers with screaming violins, running brass lines and furious timpanis.

"Dreams" ushers in the second half of the album filled with noticeably longer cues. The glass harmonica is back, the Amityville-esque motif is hummed, and near the end an extremely high, pitch-bending figure is heard in the brass leading into a strong accelerando. The schizoid accompaniment from the "Suite" pokes its head again in "Escape" and the score ends on a note of quiet resolution with "Revenge", which reiterates the lullaby with an almost pastoral feel.

Nathan Barr\'s Hostel is a great listen, featuring no major synthetic elements and relying solely on the composer\'s strength as an orchestrator. Its sound comes together with the help of low piano rumbles, terrifying gongs, deep, throaty contrabasses, and schizophrenic violins. Was this score the right one for the movie? Is it truly frightening? Is it really original? Barr is known for using a variety of non-traditional, exotic instruments in his scores (which he usually performs) and their absence here is a bit puzzling. Putting aside what could have been, his actual score is well crafted, powerful, and cohesive. Although the staples of orchestral horror are all present and accounted for, although there is hardly a gallon of originality in its orchestrations, I\'ll be damned if I wasn\'t entertained for 43 minutes. Perhaps the composer could start peeking at what lies outside the box the next time around (having such a diverse musical background); for now, however, I am content with the voice he mustered here. Hostel is a highly listenable horror score, one that was practically begging for a CD release.