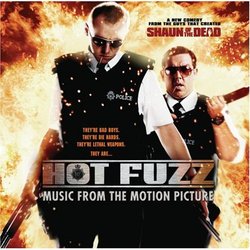 The Shaun of the Dead crew is back for more loving satirical genre-bending fun, this time attacking the buddy cop movie. The soundtrack release of Hot Fuzz makes a big mistake, and I\'m talking a huge one. I don\'t pretend that important people really read this stuff, but do not, for the love of all that is good and holy, do not layer in voice-over and sound effects on song soundtracks… or any soundtracks for that matter. You\'re not trying to sell the movie to us, we already have the album and chances are, that\'s because we\'ve already seen the movie. In the very first track, a voice over snubs out one of greatest 80\'s pop rock intros (Adam Ant\'s infectious "Goody Two Shoes") and weaves the voices in and out of various tracks as transitions.  Just do what the Quentin Tarantino albums do - make the dialogue pieces a separate track. Eclectic albums like these have vintage tracks that collectors want, and when a song has Jim Broadbent\'s or Nick Frost\'s voices on them (brilliant actors, don\'t get me wrong), it means the collector may want to find the song again to get an untainted version. It\'s a damaged bill of goods so I\'m taking a star off. Feel my impotent wrath!

Anyhow, obnoxious anal internet rant over. This makes me really grumpy, because this is one great collection of music. Like their previous Shaun of the Dead album, the filmmakers are clear lovers of all types of British rock music.  They\'ve included some great 60\'s oldies like The Kink\'s title track from The Village Green Preservation Society (their own Sergeant Pepper spin off), one hit wonder Arthur Brown\'s "Fire" and The Trogg\'s "I Can\'t Control Myself." Then they bounce up to the 80\'s for some XTC ("Sgt. Rock") and on to some 00\'s retro rock (the Fratellis\' "Solid Gold Easy Action" could have been performed by Sweet or T.Rex twenty years previous).  All of the tracks have a fun rocking beat, emphasizing good ol\' guitar driven pop rhythms like Eels\' "Souljacker Part 1" (used prominently in the trailer). Only "Here Come The Fuzz" stands out with break beat drum accompaniment, but the song isn\'t bad at all.

The album also shows off the movie\'s strong buddy cop homage.  David Arnold\'s score is given a well-rounded twenty plus minute suite.  His parody score sends up most specifically the Media Ventures/Jerry Bruckheimer style hard rock/ driving horns with the Harold Faltermeyer styled guitar solos.  Arnold also works in some of the lonely Eric Clapton solo guitars from the Lethal Weapon films along with subtle elements of Michael Kamen\'s musical stings. Arnold also layers in some cheeky Jerry Goldsmith references (specifically The Omen) and sends up his own James Bond work at the same time. Pretty nifty. John Eric Alexander\'s trailer music to the Lethal Weapon trailers is used in "Lethal Fuzz." This previously rare music is unfortunately overshadowed by audio pulls from the movie, which makes me very... (see first paragraph).

There\'s a small bit of stuff missing from foreign releases, like Robert Rodriguez\'s own satirical "Avenging Angel." The music is strong enough to hold its own without it, but I recommend the album with strong technical reservations.