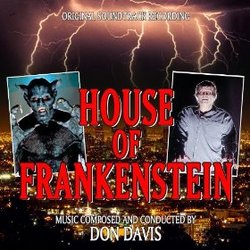 I'm sure I've mentioned it at some point in one of my past reviews: I'm a sucker for choral music. Especially loud classical-style choral and orchestra works. So when I got House of Frankenstein, you can imagine my glee to discover that a large part of what Don Davis wrote was choral work. It shouldn't have been a surprise - House of Frankenstein was a miniseries about a real estate tycoon searching for Frankenstein's monster for a theme club he wants to build. That sounds like a rather lame plot, and the miniseries ultimately was not received very well. But this was one of those situations where a particular aspect of a production overcame and surpassed the rest of the show. In this case, it was the music.

Beginning with a tense bass line, which grows into a full-on choral piece, "Main Title" stands out as a good example of what type of score this is. An action cue follows the main title bit, where Davis showcases his strong orchestration abilities. Most of the score is comprised of incidental underscoring, but retains the main title theme more or less throughout. Some of the tracks that deserve close notice: the very classical-sounding choral piece in "In Paradisum"; "Frank Restrained", which while being a homage to Wojciech Kilar's score to Bram Stoker's Dracula still retains it's own sense of being; the soft romantic melody in "Vile and Contemptible"; the emotional theme in "Stake for Woody"; and of course the rousing finale in "The Vampire Lawyer-Finale".

It should be apparent from this album and the one to Bound that Don Davis has fun with track titles on his promo releases. It should also be apparent that he is dripping with talent, seeing as in the same year that he wrote this highly enjoyable score, he also wrote scores to four other television movies, two more miniseries, a full-length score to Warriors of Virtue (another underrated score), and helped orchestrate some parts of Titanic. Having recently worked on The Matrix, Universal Soldier 2, and The House on Haunted Hill, Don Davis is surely becoming a major player in the film music scene. This score is only available as a promo CD - and I would suggest doing everything you can to get your hands on it.