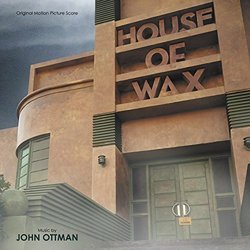 Continuously growing bankrupt of new ideas, Hollywood continues to raid the vaults (or perhaps more fittingly - crypts) of the horror back catalogue, this time hoping an injection of whatever "hip teen stars" are favourites this week will breathe new life into a contemporary remake of the 1953 release, The House of Wax. One can assume such hopes have been dashed however, with the film putting in a modest performance at both the domestic and International box office.

Composed by John Ottman, the score for The House of Wax manages to rise above the movie\'s dreary teen horror roots and deliver a work on a far grander scale, free of wall to wall percussion noise that one might be expecting. This is not to say the score is without its louder moments of course, but it\'s efficiently balanced by the likes of "Story of the Town," a particular favourite alongside "Three Sons," both cues confidently subdued and sinister in their execution.

What\'s especially pleasant to the ear is that the score acoustically feels both a little old and a little new. Recorded within the confines of the chapel at Seattle\'s Bastyr University, the resonance of the location seems to lend itself well to the overall gothic nature of the music, perhaps most strikingly evident early on with the album\'s second track "Rirtual/Escape from Church,." a fittingly brooding piece and a highlight of the album, where the composer is not afraid to let every section of this large orchestra go unnoticed whilst throwing in a choir for added flavour.

A lone pipe organ is left to play out the album in "Endless Service" and I\'m half reminded of a similar ominous melody one is graced with when exiting Disneyland\'s Haunted Mansion attraction, which I suppose in the end is not all that bad a way to sum this score up. The House of Wax is certainly brash with fleeting subtleties, yet a fun ride nevertheless, and with a track humorously entitled "Paris Gets it" it would seem Ottman himself wouldn\'t have had it any other way.