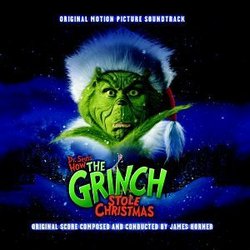 How The Grinch Stole Christmas

Review: How The Grinch Stole Christmas

Slowly, one by one, we are seeing classic animated television shows and features make the transition into live-action feature length films. While many of these have not been too successful (Dudley Do-Right, Rocky and Bullwinkle), some have been met with success (George of the Jungle). Now we get a live-action version of the classic Dr. Seuss tale, How The Grinch Stole Christmas.

Directed by Ron Howard and starring funny-man Jim Carrey in the title role, it seems to have all of the elements necessary for a hit. In the end, though, the film ends up being a nice adaptation of the 30-minute animated film with an hour of Jim Carrey "filler" - some of which just doesn't feel as though it belongs. Howard has used James Horner to score a handful of his films, and ended up attaching him to Grinch.

The soundtrack album starts out with songs from the film - not "inspired by", almost all of these songs (not sure about "Grinch 2000") appear in the film and have a 1940's and 1950's type of feel to them. "Grinch 2000" is a rap between Busta Rhymes and Jim Carey, and seems mismatched with the rest of the album - even though it's somewhat amusing. Songs by Barenaked Ladies ("Green Christmas"), Ben Folds ("Lonely Christmas Eve"), Little Isidore and the Inquisitors ("Christmas of Love") and even N'Sync ("You Don't Have To Be Alone") all grace the album with their Christmas-themed lyrics. The nostalgic flare to the music comes from the film, where everything feels like it was stuck in the 1950s - except for Carrey's performance.

He does, however perform the (necessary) "You're A Mean One, Mr. Grinch". While it's not quite Thurl Ravenscroft's deep bass voice (from the original animated version), Carrey does a fine job singing - and like Robin Williams in Aladdin, he doesn't limit his performance to one voice. The Faith Hill song, "Where Are You Christmas?" was so lyrical and moving that it didn't surprise me to learn that James Horner and lyricist William Jennings wrote it. Jennings has now redeemed himself (in my eyes) for the terribly cheesy lyrics to the songs for The Mask of Zorro and Bicentennial Man.

James Horner's score, as expected, delivers. Using his "Where Are You Christmas?" theme throughout, it's a nice combination of saccharine sweetness with Stalling-like humor. All of the Horner touches are there, including the four-note half-step trill that we heard first in Willow and then in some of his other scores. The song "Happy Who-lidays" is another Horner original song that makes an appearance in the score, and it seems to fit in perfectly with the original Grinch songs - that is, if they where there. Only "You're A Mean One, Mr. Grinch" and "Welcome Christmas" make an appearance in the film, and on the album. But this Grinch isn't really Dr. Seuss's anymore. With jokes about marital infidelity and wife-swapping, as well as references to pop-culture that will be dated in six months, I felt that this Grinch just wasn't what I was hoping it would be.

But there is one major "feature" I have a problem with - dialogue. Yes, there are four dialogue cues on the album - which is fine, since they're amusing and are isolated to their own track. But the inclusion of dialogue and narration over portions of the orchestral underscore is something I take issue with - especially when the dialogue only makes sense when heard while viewing the film - and some of the editing makes it so that lines are missing. It's rather unfortunate, but that might be a big enough detractor for people to prevent them from buying this otherwise enjoyable album. Running 76-minutes longs, the album has about 30-minutes of score, and with a few notable songs, it's pretty much worth getting.