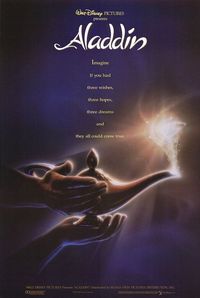 In 1992, coming on the heels of a one-two punch with The Little Mermaid and Beauty and the Beast, Walt Disney Feature Animation released Aladdin. Directed by John Musker and Ron Clements, the film was an award-winning box office smash, in no small part to the manic vocal performance by Robin Williams in the role of "Genie" and Alan Menken/Howard Ashman/Tim Rice's songs. The plot is straight-forward enough: the Sultan's Grand Vizier, Jafar (voiced by Jonathan Freeman) is seeking a magical lamp containing a genie in the mythical Cave of Wonders—which can only be accessed by someone who is a "diamond in the rough." He finds that diamond in street-rat thief Aladdin (voiced by Scott Weinger), who he had jailed after a chance encounter with Princess Jasmine (voiced by Linda Larkin). Jafar secretly frees Aladdin and uses him to get the lamp from the Cave of Wonders, but when Aladdin is double-crossed by Jafar he is trapped in the Cave of Wonders with his pet monkey, Abu. All hope seems lost until he accidentally unleashes the Genie (voiced by Robin Williams) from the lamp, who grants him three wishes. Aladdin gets his freedom and returns to the city as a foreign prince intent on courting Jasmine. But Jafar has other plans to gain his power over the sultanate of Agrabah.

23-years after its release, Aladdin holds up very well. The energy is high, the emotion still remains, and with a new Diamond Edition release on Blu-ray, the film hasn't looked this good, probably ever. This is one of the best looking animated films I've seen on Blu-ray, hands down. I'm not sure what clean-up was done, but every animated frame is pristine. Color is bold and vibrant, detail impeccable, and where I would have expected to see some dithering issues in the subtle color gradations of the deep blue nighttime skies, I found none at all. Truly an exemplary effort from the Walt Disney Home Video folks. Audio, on the other hand, I found to be a mixed bag. Touting a new English DTS-HD Master Audio 7.1 mix, the audio is very dynamic and immersive, with extensive use of the surrounds for effects and music. I found that the dialogue in the center channel was a bit weak by comparison, however, making it feel slightly unbalanced, and I had to manually turn up my center speaker to compensate. Sadly missing is the 1992 theatrical 5.1 mix, which was included on the DVD.

The Platinum Edition DVD for Aladdin was released back in 2004 and most of the extras have been carried over to the new Blu-ray release. These extras include two commentary tracks: one by directors John Musker and Ron Clements with co-producer Amy Pell, and the second with supervising animators Andreas Deja, Will Finn and Eric Goldberg. Also included (in original standard definition) is a rather extensive documentary, "A Diamond in the Rough: The Making of Aladdin." The section of the doc focused on the music from the film is dedicated to the songs and very little about Alan Menken's Oscar-winning score. However, there is a featurette on Menken: "Alan Menken: Musical Renaissance Man." Presented as a (now slightly dated) mini-biography, we get interviews with Menken's parents and family, getting a sense of the man behind the music. Also included is "The Art of Aladdin: Art Review with Filmmaker's Commentary," four Deleted Songs, and two Deleted Scenes. A lot of focus on the deleted song "Proud of Your Boy" was given as well. We get the 2004 Clay Aiken music video, the original story reel, a behind-the-scenes look at the song. Unsurprisingly, we also get a slew of extras on the Oscar-winning song "A Whole New World," the 2004 Jessica Simpson/Nick Lachey music video, a behind-the-scenes look, and the original 1992 music video with Regina Belle and Peabo Bryson. The trailer is also included, in glorious standard definition.

There are, however, some new extras exclusive to the Blu-ray. In "The Genie Outtakes", co-directors John Musker and Ron Clements, along with supervising animator Eric Goldberg, talk about Robin Williams and present some outtakes from his recording sessions (basically alternate line performances) set to storyboards. It would have been nice to see some actual footage of Williams in the recording booth, but it's still a nice glimpse at the rather insane rapid-fire improv style in which Williams performed his role. But it's a nice tribute to a talent that left us way too soon. "Aladdin: Creating Broadway Magic" is a nice featurette talking about the challenges faced with converting the film to a Broadway stage show. The main challenges were the Genie and the flying carpet; the former issue was solved by going back to Menken/Ashman's original idea envisioning the Genie as a Cab Calloway-styled performer. "Genie 101," dedicated to the memory of Robin Williams, features voice actor Scott Weinger shares his favorite pop-culture impressions that Williams did in his vocal performances for the film, and "Ron & Jon: You Ain't Never Had a Friend Like Me" lets the two co-directors talk about their friendship and early career at Disney. Finally, the worst feature on the disc is the (blessedly short) "Unboxing Aladdin," where some Disney Channel 'star' shows us some of the Easter eggs the animators hid in the film. The Easter eggs themselves are interesting, but the delivery of the featurette is so annoying and frustrating that I can't in good faith recommend watching it.

Aladdin came as the Jeffrey Katzenberg era of Disney was peaking, and is a truly great film. With this new Blu-ray release, the studio has paid tribute to the artistry of their animators, with a truly gorgeous visual presentation. While I wish the audio was a bit more balanced, by including nearly all of the classic DVD extras, as well as some new ones, this is easily a must-have release.