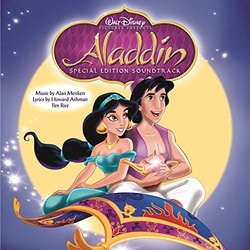 Released originally back in 1992, and then re-issued in 1999, this new "Special Edition" soundtrack of Aladdin features the same material as the original release, but remastered and with two bonus tracks. The two tracks, "Proud of Your Boy (demo)" and "High Adventure (demo)" were previously only available on the 4-disc "Music Behind The Magic" box set. The first song is, as described above, a tender ballad that Aladdin sings for his mother. "High Adventure" is a fun number that doesn't fit at all in the film that was finally made, but for an earlier version of the story, it would probably work. Reminiscent of some of the musical numbers that Menken and Ashman wrote for Little Shop of Horrors, the fast-paced lyrics and jaunty melody will certainly stick with you long after the album finishes playing. Unfortunately, there was an entire disc on the "Music Behind the Magic" box set dedicated to Aladdin's unused concepts and demos, and it would have been a real treat to have those released here.