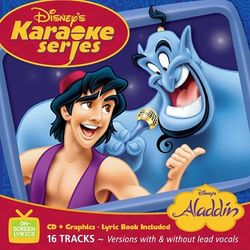 Walt Disney Records recently started the new line of "Disney Karaoke Series" albums. Exactly what you would expect, these discs feature two versions of classic songs from Disney films, both with and without vocals. Presented in CD+G format, if you have a karaoke machine, you can read the lyrics on screen as you sing along. Of course, this is a novelty item, and it can be a lot of fun during parties. However, on the Aladdin disc we received, one thing was a complete letdown: the music quality. On the DVD release, the music are filled with excerpts from music-only versions of the original recordings of the songs. That is basically what I had hoped the karaoke disc would be - original recordings, sans vocals. Unfortunately, these recordings are synth recreations. On top of that, the vocal versions aren't the original versions either, and instead are the synth versions with new performers. A printing error credits "Rim Rice" as the lyricist on a few of the songs, too! So while this is a novel idea, and karaoke enthusiasts will still enjoy it, the implementation is unfortunately less than it could (and should) have been.