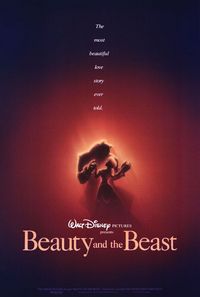 Beauty and the Beast

Loosely based on the classic fairy tale of the same name, Beauty and the Beast tells the story about the bookish Belle (Paige O'Hara), who is being wooed by the obnoxious swaggering local hunter Gaston (Richard White), but she wants something more in her life than the quiet humdrum life she lives in the village with her inventor father, Maurice (Rex Everhart).  When he gets lost in the woods en route to show off his new invention at a fair, he stumbles across a castle, inhabited by the Beast (Robby Benson).  The Beast is a bitter character, formerly a prince who was put under a curse due to his inability to show a little compassion to an old beggar woman (actually an enchantress) who needed shelter for the night.  If he doesn't find true love before he turns 21, he will remain cursed forever.  The Beast holds Maurice captive, and when Belle comes looking for her father, she is led to the castle where she offers to take her father's place.

The transformed servants in the castle, candlestick Lumičre (Jerry Orbach), clock Cogsworth (David Ogden Stiers) and teapot Mrs. Potts (Angela Lansbury) all try to keep Belle happy, but when she accidentally angers the Beast, he scares her, and she tries to escape.  Attacked by wolves, the Beast rescues Belle from danger, but is injured in the process.  Belle helps the Beast heal, and gradually the two become friendly. Meanwhile, Maurice has tried to get Gaston and the villagers to mount a rescue attempt, but they don't believe his story about the Beast - so he goes off to try to rescue Belle himself.  Will love bloom between Belle and the Beast before his 21st birthday?

The way that the film unfolds is classic, from the tension and mystery of the dark forest, to the blossoming romance between Belle and the Beast, to the adventure and excitement of Gaston and the mob's attack on the castle.  Helping the story along are the original songs by Alan Menken and Howard Ashman.  The pair had a previous success with The Little Mermaid, and the songs they came up with for Beauty and the Beast help move the story forward through music, giving the audience a lot of information in a fun and entertaining way - resulting in a lot of story and character development happening within the 84-minute runtime.

Beauty and the Beast also marked a huge leap forward in animation technique, taking advantage of the digital ink-and-paint CAPS (Computer Animation Production System) process, resulting in the second 100% digital feature film produced (after The Rescuers Down Under).  It also allowed the filmmakers to try out a fully computer-generated background for one particular sequence, the ballroom scene, now considered a classic moment in animation.

Beauty and the Beast went on to win numerous awards, including Golden Globes for Best Picture (Musical or Comedy), and Academy Awards for Best Song and Best Score.  Re-released in 2002 as a "Special Edition", the film had a formerly deleted musical number ("Human Again") re-inserted into the film.  Both the theatrical and "special edition" versions of the film - as well as the storyboard-based New York Film Festival "preview" version - are now available in a newly restored and remastered Blu-ray release.

The first disc of the three-disc set starts out with all the versions of the feature film.  The Special Extended Edition (HD, 92-minutes), the Original Theatrical Release (HD, 84-minutes), and the Original Theatrical Release with Story Reel Picture-in-Picture (HD, 84-minutes).  The video quality for all of these is spot-on.  Colors are incredibly vibrant, and the remastered image - output directly from the CAPS system - is essentially perfect. Details are abundant, from the painted backgrounds to the cleaned up line art, every freeze-frame looks spectacular.  For a hand-drawn animated film that is nearly 20 years old, this looks like it was made yesterday. (It's certainly on par with, if not a bit better than, last year's Blu-ray transfer for The Princess and the Frog!)

Audio is presented in only three flavors: an English 7.1 "Disney Enhanced High Definition Sound" version (i.e. DTS-HD Master Audio 7.1), as well as Dolby Digital 5.1 French and Spanish.  The soundscape is immersive and full of details. The environmental sounds are completely lifelike and transport you to the forest locales.  Dialogue moves all around you depending on the scene, feeling naturally placed. Most impressively, the clarity of Alan Menken's score (and songs) is amazing, and the orchestra washes over you as though they were right there with you in the room.

Extras on the Blu-ray release border on overwhelming.  Let's start with the first disc, where there are the two versions of the film (along with the picture-in-picture storyboard version for the Theatrical release).  Then, we have a feature-length commentary track on the Special Edition version featuring producer Don Hahn and co-directors Kirk Wise and Gary Trousdale discussing nearly every aspect of the film.  It's a highly informative must-listen track.  A "sing-along" subtitle track is also included, but just shows the subtitles during the songs.

Within the "Backstage Disney: Diamond Edition" section, on Disc 1, we have a new featurette, "Composing a Classic: A Musical Conversation with Alan Menken, Don Hahn & Richard Kraft" (HD, 20-minutes) features composer Menken, along with with producer Hahn, and Menken's film music agent (and self-avowed Disney fanatic) Richard Kraft.  The trio talks about the importance of the music in the film, as well as the challenges that Menken and Ashman faced writing the songs and composing the score for the film. It's a great look at the music, supplemented with some rare behind-the-scenes photos and footage.  "Deleted Scenes" (HD, 28-minutes) contains a rather different "Alternate Story Opening" (HD, 18.5 minutes), with an introduction by former Disney Studios chairman Peter Schneider, and "Belle in the Library" (HD, 8.5-minutes), with an intro by story supervisor Roger Allers.

In the "Family Play" section, we have another new featurette, "Broadway Beginnings" (HD, 13-minutes) which looks at the development of Beauty and the Beast on Broadway, as well as a few of the famous actors who partook in the production. Finally, a "Music Video" (HD, 3.5-minutes) contains the new Jordin Sparks rendition of the classic title song, "Beauty and the Beast".

Popping in the second disc, we get to the meat of the supplements.  First up in the "Backstage Disney: Diamond Edition" (on Disc 2) is "Beyond Beauty" (HD, 157-minutes).  This feature-length documentary covers nearly every aspect of the production, with all new interviews, archival footage, illustrations, ad much more.  The documentary can be viewed in many different ways. Like the Prince of Persia: The Sands of Time extra, as you watch the piece, you can interactively "dig deeper" when prompted, seamlessly branching to the extra. A handy index also keeps track of what you have and have not seen, letting you go back and watch bits you might have missed.  It is truly a wealth of information. "Family Play" lets you play a trivia game ("Enchanted Musical Challenge") and "Bonjour - Who Is This?" is a "Disney TelePlay Game" - a secret identity BD-Live powered game that requires people to use their phones.

The "Classic DVD Bonus Features" contains all of the previously released extras.  "The Story Behind the Story" (SD, 26-minutes) is a look at the source material that inspired seven different classic Disney films, hosted by Celine Dion.  She also introduces the original Celine Dion / Peabo Bryson music video for "Beauty and the Beast" (SD, 4.5-minutes).  The "Early Presentation Reel" (SD, 3-minutes), hosted by Don Hahn, is here, as well as an alternate version of "Be Our Guest" (SD, 5-minutes), an alternate score moment for "The Transformation" (SD, 2-minutes), "Human Again" (SD, 7-minutes) - at the time a deleted song only in storyboard form and demo vocals - gets two introductions, one by Hahn, and one by Menken. "Animation" contains animation tests and more, a "Camera Move Test" (SD, 2-minutes) showcases the CGI development of the ballroom set, and finally, two theatrical trailers and four television spots are included. Unfortunately, these are all in standard definition.  Finally, the third disc contains the DVD version of the film, so you can still enjoy the movie at a friend's place even if they don't have a Blu-ray player.

Beauty and the Beast is a classic animated masterpiece. With a solid storyline, excellent characters, memorable songs, the film alone is worth having. Toss in the incredible presentation on Blu-ray, two versions of the film, and a rather overwhelming amount of extras - including all of the previous DVD extras - and you have a Blu-ray package that is absolutely a must-have.