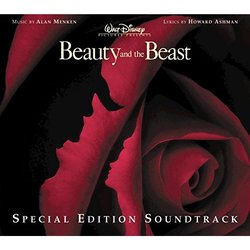 Beauty and the Beast - Special Edition

By the late 1980s, Walt Disney's Animation branch had hit a low point, with lackluster releases such as The Great Mouse Detective and The Black Cauldron (I love both of those films by the way).  However, they turned a new corner with The Little Mermaid.  That film introduced audiences to a bright, lush and musical world brought to life by the Broadway team of composer Alan Menken and lyricist Howard Ashman. Both the film and soundtrack were a smash hit, and the question that faced Disney was whether they could they produce a follow up that would be just as popular. What they ended up with was one of the most popular films of all time, not to mention the only animated film to be nominated for the Academy Award for Best Picture. I refer to one of the best Disney films ever, Beauty and the Beast.  Now, for its 10th Anniversary, Walt Disney is re-issuing the film exclusively to IMAX and other Giant Screen theaters.  With a cleaned up soundtrack boasting a new musical number, the songs and score to the film sound absolutely stunning.

My previous experience listening to Beauty and the Beast was on cassette - this is the first time I have heard it on CD.  The album presents the songs first, and followed by the score.  The songs are great, and like all other Disney songs they take you back to the time and place when you first saw the film.  The new song, "Human Again", was actually used in the 1994 Broadway production of Beauty and the Beast, and I'm glad they brought it back - it's a great song, and keeps with the heart of the film.  (It was actually written for the film, but it was never used.)  With the exception of the new song and re-mastered sound, the album is nearly identical to the previous CD release.  Added on as bonus tracks, however, are a few neat demo tracks from Menken's work tape.  They give the listener a glimpse at the creative process, and is a very cool addition.

The first demo is of "Be Our Guest". In this version (and in the original script) it is sung for Belle's father when he first comes to the castle. But to make that scene more dramatic, they shortened it and played the song when Belle begins to explore the castle for herself. The next track, "Beauty and the Beast," features Ashman singing (with his original song) with Menken playing in the background. Ashman messes up a few times, then the track glides into what they had on screen; it's a little different than Ashman's original version.  Finally, the last demo track is an early score version of "Death of the Beast."

While the CD holds itself well, the only gripe I have is that there are still only a few score cues presented, and the songs and score aren't mixed up in chronological film order. That really is my only gripe about this CD.

I believe this CD is worth getting, especially for those who don't own the original. This is a great "feel-good" disc, and the songs bring a smile to my face. For those that own the original, you know you want to get this one, if anything to hear the new re-mastering job. Enclosed in an elegant CD sleeve, album comes with a full booklet containing a note from Alan Menken, full color photos and full lyric book - truly a must own for any fan of Beauty and the Beast and a definite must own of Disney fans everywhere.