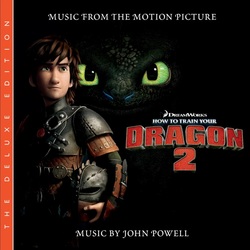 How to Train Your Dragon 2 - The Deluxe Edition

Beloved by critics and audiences alike, the How to Train Your Dragon trilogy was produced by DreamWorks Animation, based on a book by Cressida Cowell. Written and directed by Dean DeBlois, the second film continues the story of a young dragon hunter, Hiccup, who befriends rather than kills a dragon, Toothless, by introducing Hiccup's mother (voiced by Cate Blanchett) and a formidable villain, Drago (Djimon Hounsou).

John Powell created a glorious, Academy Award-nominated score for the first Dragon film, and continued his style for the sequel: gloriously symphonic, enhanced with Irish instrumentation, it is deep and rich in the classical tradition while conveying emotion and nuance for modern audiences, particularly around the joy of flight. As with the first film, Icelandic singer Jˇnsi collaborated with Powell and contributed vocals to selected tracks. New to the second film are performances by the Scottish bagpipe group, Red Hot Chili Pipers.

How to Train Your Dragon 2 was released as a single CD at the time of the film. VarŔse Sarabande's Deluxe Edition expands the program to two discs, including several demo tracks, with new liner notes by Tim Greiving interviewing the director and composer.