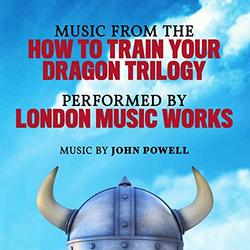 Music from the 'How to Train Your Dragon' Trilogy

Based on Cressida Cowell's popular children's book, set in a mystical Viking world, the animated trilogy follows the story of teenager Hiccup, and dragon Toothless. Aspiring to be a dragon slayer, Hiccup captures his first dragon, but instead of killing Toothless, he befriends him. This rousing epic mixes comedy, touching moments and action sequences and John Powell's masterful score perfectly complements it. The trilogy proved to be both a critical and commercial success, grossing $1.6 billion worldwide.

In How To Train Your Dragon series, John Powell relies on the tradition of Wagnerian leitmotifs. The themes representing different characters, concepts and locations are spread across the trilogy and are varied and developed, orchestrated in different ways. Often, the tempos and moods change and the themes play in counterpoint to one another.

On this album, London Music Works skilfully brings together a selection of the very best themes from Powell's consummate and game-changing animation score.