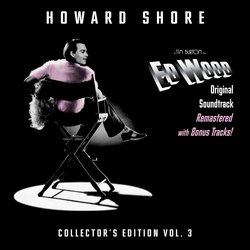 This 20th anniversary collector's edition of Howard Shore's score for Ed Wood has been remastered, repackaged and includes 4 bonus tracks that were not included on the original release.

Ed Wood, the award-winning film by Tim Burton, is an homage to an innovative era of filmmaking when there were no limits to imagination. Shore composed, orchestrated and conducted the score inspired by Sci-fi and B-movies from the 1950's. The work is wonderfully strange and punctuated with Afro-Cuban rhythms and strikingly poignant moments that capture the highs and lows of the life, work and passion of Edward D. Wood Jr.

Performed by the London Philharmonic Orchestra, the score also highlights the great playing of the brilliant Russian Thereminist Lydia Kavina (the grand-niece of the inventor Lťon Theremin).