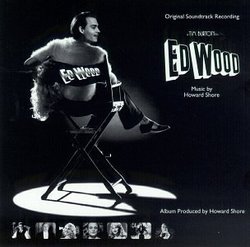 Ah, the classic Hollywood director/composer breakup. Torn Curtain was curtains (stupid pun intended) for Bernard Herrmann and Alfred Hitchcock. The Nightmare Before Christmas likewise marked the breakup of Danny Elfman and Tim Burton for a time. Luckily, all was rectified, as seen with their reuniting on Mars Attacks! in 1996. However, due to Elfman and Burton's brief breakup in 1993, Burton was forced to find another talented whiz composer for his 1994 film about the world's worst director and his macabre group of friends, aptly titled Ed Wood. That composer turned out to be Howard Shore and he can only be, at a minimum, regarded as a whiz for his work on this film.

Those who love the B movies of the 1950's should drop everything now, rush like rabid, twinky-fed squirrels and buy this album. All others may amble or mosey. It was by mere chance that I happened to pick this album out of the millions of others to buy when shopping for my monthly film score appetite (I buy at least one CD a month, and am satisfied...for another month, at least). Of course, most may buy this CD for it having anything to do with the Tim Burton film, as I did. Others will buy it for the sheer bliss and rapture provided by Howard Shore's wonderful musical talent, as I discovered later. On the very first track, "Main Title", those who enjoy the high-pitched squeals of the theremin (which Elfman seemed to have borrowed in his work on Mars Attacks!), as well as the cool and upbeat sounds of the bongo drums, will be in nirvana. Shore uses those two instruments quite frequently throughout the record, making it not only very unique, but very hip and suave, conjuring up images of the debonair, long gone golden age of Hollywood. The score is wonderfully over-the-top and Mickey Mousy, very reminiscent of the style of the 1940's and 50's movie score composers like Max Steiner, Franz Waxman and Alfred Newman. It does wonders for the listener, as well as the viewer of the film, transporting us to a place, and sound, of yesteryear. Must-hear tracks: "Main Title", "Backlot", "Elmogambo", "Kuba Mambo", and "Ed Takes Control".

The whole compilation is a joy to listen to, even when the voices of Jeffrey Jones and Martin Landau drown out parts of the score, which is the only extremely minor beef I have with the CD (thus the 4 star rating). Even so, Shore effortlessly compliments the film with this gallant effort and totally makes us forget the long-time partnership of Burton and Elfman with his musically humorous capabilities displayed in this film. It's fun to imagine what this score would have been like had Elfman scored it. It's even more fun to just listen to what Shore's inventive mind has concocted here: a truly enjoyable and fun listening experience.