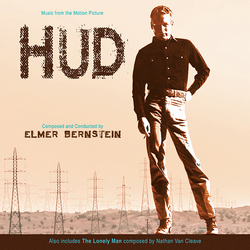 Elmer Bernstein's score for Hud runs approximately six minutes, making it one of the shortest film scores ever. But what a six minutes it is—in fact, it's perfection and just right for the film. Bernstein recorded his six minutes twice: once with a 12-piece ensemble, and then, a week later, re-orchestrated (by Bob Bain) for three guitars. Presumably the revision was at Director Martin Ritt's request for a smaller and even more intimate sound—which really was the right choice. The music is sparse, yes, but it's potent every time it appears. There's also some source music in the film—car radios, jukeboxes, records.

For this first ever release of the score to Hud, we present not only the film version of the score, but also the alternate version scored for chamber orchestra, as well as some source music cues and Bernstein's work for the trailer. It was a wonderful discovery to find it on the session masters housed in the Paramount vaults, and the tapes were in excellent condition.

In looking for something to pair with Hud, we found a truly beautiful score by Nathan Van Cleave for the 1957 western The Lonely Man. Van Cleave's score is a major discovery, as you'll hear on this CD. Van Cleave had been at Paramount for years, orchestrating some of their biggest hits. But he was also an expert composer, and over the years he turned in wonderful scores.

For The Lonely Man, Van Cleave came up with a beautiful main theme, for which Jack Brooks provided lyrics; Tennessee Ernie Ford sings the song in the film. The score has real depth and its secondary themes are dramatic, elegiac and poignant, giving the film a strong spine. The Lonely Man is a world premiere release on CD and is presented complete from tapes housed in the Paramount vaults. A few cues were taken from the music stem. We hope you'll enjoy discovering this really terrific music.