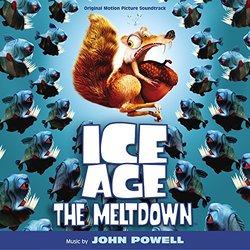 John Powell\'s varied career has shifted in recent years more toward the action/thriller genre (the Bourne series, Mr. and Mrs. Smith, Paycheck). While Robots was a good score by Powell, it did not return to the style he made so popular in Shrek, Evolution, and The Road to El Dorado. Ice Age: The Meltdown, however,does. Fully orchestral, with a playfulness that retains its musicality without becoming corny, this score is a great addition to Powell\'s filmography. Probably his most playful since Chicken Run with Harry Gregson-Williams, Ice Age: The Meltdown utilizes many percussive effects, even various wind and string instruments in percussive ways to keep the score moving. This is especially apparent in the opening cue, "The Waterpark".

One element I have always enjoyed in Powell\'s scores is his use of acoustic guitars and other string instruments along with his light percussion style, even in conjunction with the orchestra ("Call of the Mammoth"). Many of the cues on the hour-long album are short and Powell does not develop his theme as well as he has for previous scores, such as Evolution. The second half of the album is a bit more dramatic as the action on-screen picks up, beginning with "The Boat and the Geysers". The percussion becomes heavier and the brass becomes a stronger presence. This continues through "Mammoths", which is the highlight of the album where the theme comes out in full in the French horns backed by trumpets. This cue ends with an eerie Thin Red Line-like pulsating flute part.

There are a couple cast songs that Powell seems to have written music for, or adapted for the film (such as "Food Glorious Food" from Oliver!). These are fun songs that kids will enjoy, but I find somewhat detracting from the actual score. They are easily skipped, though they do fit in with the playful nature of the score. This is not Powell\'s best score, but it is nice to see him return to the energetic animated films. I do look forward to his branching into new genres with this summer\'s Flight 93 and X-Men: The Last Stand.