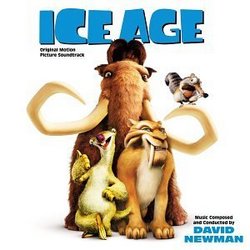 Let's be honest. Ice Age, while focusing on the story of a mismatched group of prehistoric creatures and their quest to return a human baby to it's father, is ultimately about Scrat. Yes, the saber-toothed squirrel obsessed with his acorn. Scrat had audiences on the floor from the beginning of the film, and eventually, with the help of voice actors Ray Romano, Denis Leary, and John Leguizamo, kept the momentum going. Also keeping the pace moving in this computer-animated film was a dramatic and exciting score by David Newman.

The album begins with a pounding fanfare ("Opening Travel Music") heralding the opening titles of the film, where a herd of creatures is heading south to avoid the impending ice age. It's heavy on the brass, and the theme is in some regards, annoyingly "in your face" - but it certainly fits for a herd on the move. "Angered Rhinos" underscores a rather amusing confrontation between Sid the sloth (Leguizamo) and a pair of rhinos, and musically Newman is definitely having fun with the orchestra. The main theme works its way into the cue a few times, but for the most part it's a nice example of the type of "animated Mickey-Mousing" that Newman does so well in the score. There's even a bit of a heroic climax that plays off the comedy of the scene, which ends with Sid meeting Manfred the wooly mammoth (Romano). "Humans / Diego" is a tender cue using strings and choir, featuring a secondary theme played on flute. It takes a bit of an edge, though, when Diego starts to track the baby. This then leads into the tense orchestral action of "Tigers Going For Baby".

Military percussion and a march ("Dodos") underscores the ironic disorganization of the Dodos and their absurd plan to survive the ice age on three melons. In a rather funny effort to protect the melons, the Dodos end up dooming themselves in "Fighting Over The Melons". It's a delightfully playful cue, full of whimsy and and plenty of pomp. The wild orchestra and occasional choir build up a frenzy to another heroic rendition of the main theme. The wild orchestra returns in "Baby's Wild Ride", a swirling playful cue that showcases Newman's great ability to take advantage of the orchestra - even the dissonant chords come across smoothly!

Now the ping-ponging begins. In a dramatic downshift, quot;Checking Out The Cave" is a tender cue, allowing us to take a small breather from the rest of the action, ad features a sweeping and warm melody accented by a choir. But then we're right back into the heavy tension with "Running From The Lava", followed by another heartwarming cue with "Baby Walks". Bouncing back into the dark tension of "Tigers Try To Get Baby", the climax of the film takes place here with plenty of animation in the music - most of the themes show up here, and the drama is kept at a high level. "Giving Back The Baby" is a softer cue that allows us to have a rather lengthy (almost six-and-a-half minutes!) tender moment that encompasses the end of the film. Oddly enough, it just cuts off - and that's probably the only major flaw with the entire album - it just ends. Sure there's an emotional payoff, but it is a bit jarring the way the cue just stops.

There is a cue I didn't mention yet, but it's earlier on the album. "Walking Through" is an arrangement of the Dmitri Kabalevsky piece, "The Comedians". It's a playful and inquisitive piece that truly got me craving to hear the original. All told, this is a very solid album, running about 35-minutes long, and features some solid playful music by David Newman. You might want to see the film first, but with the exception of the odd cut-off ending, this is an album work checking out.