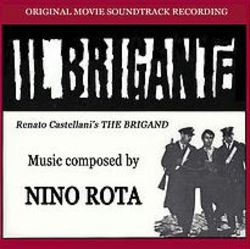 The soundtrack album was first release on LP in Italy in 1961 and reissued in the USA in the 1980's, but ultimately it felt into oblivion due to the movie's lack of international distribution.

Although offering some light jazzy pieces and folk oriented passages, the later tracks sometimes relying on the accordion, most of the score features the dramatic side of maestro Nino Rota. The style is reminiscent of the early films by Federico Fellini and Luchino Visconti. Muted trumpets, trombones and woodwinds prevail over strings to create an overall brooding atmosphere. In the most intense passages, like the long La Fuga Disperata & Finale, the tone becomes lyrical. Some listeners might also find a similitude between Il Brigante and The Godfather's scores that would make Nino Rota renowned in Hollywood.