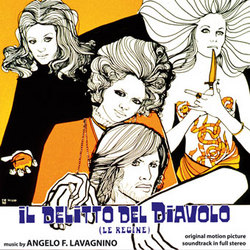 Digitmovies explores the supernatural world by releasing, for the absolute first time on CD, the OST by Angelo Francesco Lavagnino for the dramatic-horror film Queens of Evil (Il Delitto del Diavolo). The complete CD is in full stereo.

At the time, the film and its leading male character had so much success in Japan that C.A.M. released the album Seven Seas from King Records of Tokyo in Japan. The album (7 Seas GXH 6032) contains 13 tracks mixed with many dialogues in mono from the film. It also contains a track by Stelvio Cipriani taken from "Femina ridens" which was used for the breakfast scene where two beautiful sisters serve cake to the guest. In addition to the themes from Lavagnino, the album contained two songs written and interpreted by Lovelock.

For our CD (59:44 minutes) we used the master tapes in superb stereo from the recording session and so we were able to release each and every note recorded at that time. Included are songs by Ray Lovelock (one of which was used in the beginning and ending credits with two different mixes). We obviously didn't include the piece by Stelvio Cipriani.

Lavagnino wrote an evocative musical score for the orchestra based on a reoccurring love theme that is both sacred and profane. It also includes Alessandroni's "Cantori Moderni" choir with the magic voice of Edda Dell'Orso on vocals and a beat score. This passage alternates with grim pieces with an oriental atmosphere thanks to the use of different percussion instruments.