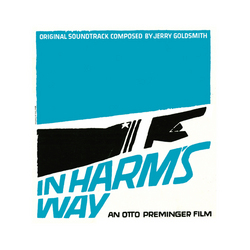 As part of Intrada's 30th anniversary celebration, Intrada is bringing back one of Jerry Goldsmith's most important scores of the '60s. In Harm's Way was the most ambitious picture Goldsmith had tackled up to that point in his career. With more than a dozen feature scores under his belt, he was a veteran. But working with the legendary Otto Preminger on a massive production with a cast including John Wayne, Kirk Douglas and Henry Fonda represented a zenith. Although the film is quite lengthy, it is spotted carefully, with very little music in the first part of the picture. But when Goldsmith steps up to the podium, he unleashes a powerful, militaristic score that remains one the strongest in his body of work.

The previous Intrada issue of the RCA album sold out fairly quickly. It was a straight reissue of the LP master, quite saturated in reverb and the only available elements at the time. When Intrada decided to pursue a reissue, a second perusal revealed the original 1/2" multitrack reels that had collected all the tracks planned for the LP master, before the reverb had been added. They also included three additional tracks originally planned but not included in that final master. Those two source cues and new score track are now added to this newly mastered and considerably crisper recording.