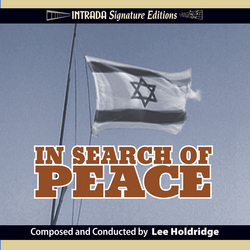 In Search Of Peace

Performed by
Philharmonia Orchestra and Chorus

The powerhouse music underlines the first two decades of Isreali existence and conflicts in the Middle East. Exciting battle music and stirring musical pleas for peace play on one side, sensitive melodies with haunting music for Golda play on the other. The "Golda Suite," built from five related cues, is a moving and emotional work that can stand on its own. Massive themes throughout are further highlights.