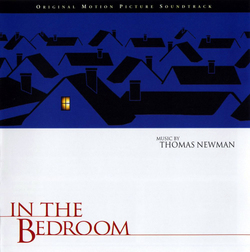 Review: In the Bedroom

In the Bedroom is a much-hyped art film which for a lot of folks, including this writer, was very unsatisfying.  It is a story of tragedy and loss, and how average folk deal with them.  Studying this pathos was intended as profound, but to me, it came off as wan and a little too self-aware.  I loved what it was trying to do, but felt it didn't live up to the challenge.  The soundtrack, similarly, is disappointing, but not by the fault of the talented composer Thomas Newman.

In the Bedroom tells the tale of a college-bound young man's love affair with a beautiful but scarred woman whose ex-husband won't take the hint and leave them alone.  The tragic results of the ex-husband's jealousy lead to the emotional devastation of the young man's parents, who must deal with living alone with each other.  The neophyte director Todd Field focuses on the little moments in life by holding the camera on seemingly nothing, and for many the idea of doing that was enough, but the execution is so uninspired that this wonderful intent is squandered and the film quickly becomes tedious.

There are two main components to the soundtrack: a score by Thomas Newman, and Eastern European music performed by Newark Balkan Chorus.  The origin of the latter is that the young man's mother (Sissy Spacek) is a teacher whose focus is Eastern European music. This music is its good old emotionally wrought self, which actually works for the piece, as well as being appropriate for Spacek's concerned but emotionally distant mother character.   Also, one has to applaud Field's bold use of this difficult folk music so prominently in his film.  Lorenzo's Oil tried, but failed, to use it similarly. Newman effectively creates an atmosphere of quiet desperation in the little New England town.  Underneath the happy veneer is emotional restraint and pain.

Both Newman's score and the folk music create a lugubrious tone that is so dark and emotionally strained it becomes suffocating. What some audiences mistook for depth was, in my opinion, heavy-handedness, i.e. making the audience think "everything seems so dark and serious, we must be the only ones missing something deep." Both Newman and the Balkan Chorus execute their music beautifully, but the tone and emotional thrust of the music is so one-note, this good music becomes tedious.  The lack of variation makes this rich music lose its edge.

Despite this criticism, this soundtrack will definitely have its fans, coming from two fronts, the first being fans of the film, the second being fans of Eastern European folk music, of whom this writer can be included.  There is enough material that both groups would be satisfied.  For those outside those groups, it is probably wise to steer clear of this soundtrack.